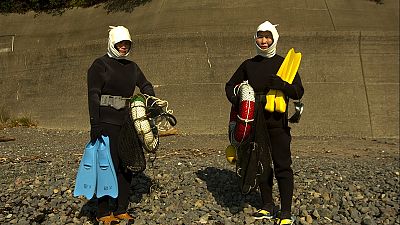 Two women over the age of 50 slip into wetsuits, pull distinctive white hoods over their heads and then disappear into the cold waters off the Pacific coast of Central Japan’s Ise-Shima region.

But these are no ordinary swimmers; Michico and Sayuri are one of the famous Ama divers, who are keeping alive a tradition that dates back thousands of years.

Ise-Shima is home to about 800 of the estimated 2000 Ama female divers who continue to free-dive in search of seafood.

The Ama tradition is included on the UNESCO Intangible Cultural Heritage list.

These fascinating women can hold their breath for up to two minutes as they dive to the ocean floor to collect shellfish and seaweed, without using any sophisticated diving equipment such as oxygen tanks.

The Ama divers have become something of a legend in Japan and are also known for their perseverance in hunting for pearls in previous centuries.

The number of women practising the tradition is slowly falling, however, and most of those still seen in action are aged over 50.

Many of the Ama divers in Ise-Shima can be found in the town of Osatsu in Toba. Here the oldest diver is aged 83, a woman with more than 70 years of experience.

Michico and Sayuri laugh when they are asked what drives them to continue diving, especially in cold and difficult conditions.

For them this is a job, a necessity to earn a living. They say they are stronger than ever, able to work to provide for the entire family.

In ancient times Japanese women were considered more suited for diving because they had more body fat to withstand the icy waters.

Today the divers wear wetsuits and the special white tops and hoods, but in previous centuries they were topless when they went diving, wearing just white loincloths.

The specialised tools they use to retrieve the seafood have also been passed on through the generations.

Visitors are able to spend time with the Ama, watching them dive and retrieve seafood that is then sold in local markets.

There is everything from abalones and sea urchins to seaweed and octopus.

The Ama divers are said to gain their strength and stamina from the goddess Ishigamisan, who is enshrined in Osatsu.

The women also carry special amulets that protect them.

The breathing method of the Ama is known as “Isobue”, or sea whistle, and it’s considered unique in the way that it helps avoid damage to the lungs.

Isobue has been included on a list of the “100 Sounds of Japan”.

After a tiring diving expedition there is time to warm up and relax in a traditional Ama hut, which is known an “amagoya”.

This is where the seafood is grilled and served for family, friends and visitors. Fresh lobster, crabs and shellfish have never tasted so good.

You may even witness a traditional dance, known as “odori”, around the fire.

The amagoya is also a great place to hear about past adventures, about “the one that got away” or the greatest find.

Did anyone ever find a pearl? “That’s a secret,” replies one of the women, flashing a wide grin.

In ancient Japan Ama diving was one of the first paid jobs for women. Many became traditional divers at a very early age, with the goal of saving money for their weddings.

In Osatsu there is an Ama Culture Museum, where the culture and history of the Ama divers are celebrated.

In Toba City there is also the Sea-Folk Museum, the Osastsu Ama House Gozaya and another Ama musuem can be found in Shima-cho in Shima City.

Another attraction where Ama divers perform is Mikimoto Pearl Island. This is said to be the place where Kokichi Mikimoto began pearl cultivation for the first time in the world.