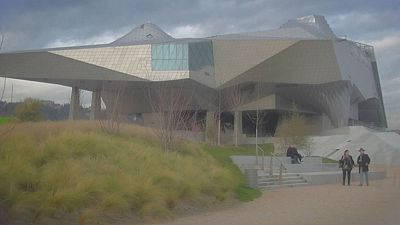 The last in this series of Postcards from Lyon comes to you from one of the French city’s newest landmarks.

The Confluence Museum sits in the exact spot where two major rivers join up.

Euronews’ Seamus Kearney reported: “The visit inside starts even before you see the collections, with this wonderful futuristic architecture.

“The project began in 2000 and the official opening was in December 2014. And since then there have been more than three quarters of a million visitors.”

Tens of millions of euros was spent on the museum project, which brings together more than 3,000 objects in the permanent collections.

Nicolas Dupont, the head of collections and exhibitions, told Postcards: “There are natural science objects, as well as archaeological and ethnographical artifacts from all around the world, which recount the great story of human adventure.

“The museum also has between five and seven temporary exhibitions every year.”

Upstairs, visitors can also enjoy panoramic views of Lyon, and there is a pleasant riverside park beside the museum.