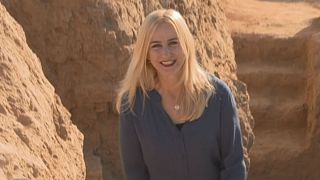 Our third edition of “Uzbekistan Life” took us to the most southern tip of the country: Termez. It’s a quiet city separated from Afghanistan by a river.

Full of archaeological treasures, it was interesting to learn that it played an important role as one of the centres of Buddhism in Central Asia. Our goal was to explore the most stunning excavation sides of the region. We joined students from the Termez University to discover Fayaz Tepa an incredibly well preserved ancient Buddhist temple.

We were are also lucky to be accompanied by one of the big luminaries of Uzbek Archaeology. Bahodir Turgunov who is the head of the department of the Fine Arts Research Centre and a member of the German Institute of Archeology. Fayaz Tepa was discovered in 1968 when archaeologists discovered the unique architecture of this temple.

The excavation gave a clear picture of the design of this monastery. Buddhist monks used to come here via the ancient Silk Road and spread Buddhism throughout the region. Coins from far and wide have been found at Fayaz Tepa, proof that travellers came from all over the world.

Unesco has supported an international team of experts who are helping to preserve this historically important site.

We also visited another important excavation site from the Kushan empire 2,000-years-ago:

Dalverzintepa is around 60 kilometres away from Termez. For Bahodir Turgunov everything changed here when he discovered in 1972 one of the biggest treasure troves ever found in Central Asia.

He and his team, were searching for artefacts when they found the kind of treasure normally reserved for Hollywood films – 36 kilograms of gold hidden in a wall, in the form of necklaces, earrings and even a bracelet weighing just shy of a kilogram.

It led me to wonder what kind of person would have been wearing that kind of jewelry.

Bahodir Turgunov explained how the gold once belonged to a jeweler that fabricated marvellous pieces of art for the emperor or his wife. Apparently he had hidden his treasure in a ceramic vessel.

Listening to him gave me goosebumps and I could see the excitement in his eyes still so many years later. He said he will always remember this day like his birthday. I was hoping to get a glimpse of the treasure but it is safe behind bars in the National Bank and so far not exhibited. I hope someday it’ll be shared with the world.

The shoot was also the opportunity to learn about the food and traditions of the southern part of the country. A local music school surprised us with a performance of traditional songs and costumes.