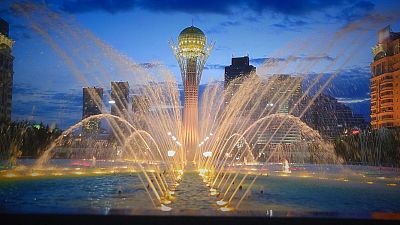 Our new series of Postcards begins in the capital of Kazakhstan, with a monument that has become emblematic of the city.

Key facts about the Bayterek Tower:

Construction of the Bayterek Tower began in 1997, the year the capital was moved from Almaty to Astana.

Euronews’ Seamus Kearney reported: “The view of the tower from a distance is stunning enough, but don’t forget to take a lift to the top to get a bird’s-eye view of Astana.”

The tower represents a tree of life visited by a mythical bird of happiness.

Saule Suyundukova from the Bayterek Tower told euronews: “The golden ball sitting on the top of Bayterek is an egg, which symbolises the beginning of life.”

“The monument is visited by a large number of people, especially in the summer,” she said. “It’s one of the major sight-seeing attractions of the capital.”

“An important part of any visit to the monument is to view the whole city: the old part, the right bank; and the new part, the left bank.”

The height of the observation deck is exactly 97 metres, symbolising the year the capital was moved.

And even at night, the tower continues to dazzle the crowds.

Astana: a futuristic city of many different styles