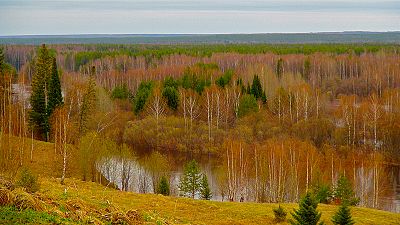 The Republic of Komi, more than 1,400 kilometres northeast of Moscow, is one of Russia’s most precious havens for wildlife and nature reserves. Almost 80 percent of the territory is covered with forests and shrubs.

The fauna here is rich, with more than 4,400 varieties. On the protected list are 33 species of birds, 15 mammal species and six types of fish. Also found here are animals such as elks, bears, beavers, otters, foxes, minks and lynxes.

Komi is perfect for those who want to escape from the hustle and bustle of big cities and crowded tourist routes.

Adventure sports and outdoor trekking and camping are very popular with holidaymakers. But you don’t even have to trek far from the capital of the republic, Syktyvkar, to enjoy breathtaking views. The village of Yb, for example, is one place tourists should visit.

The history of the Komi people is fascinating. Here we found what is called an ethno-cultural park, which is being developed to celebrate the ancient people of Komi and the communities that belong to the group of Finno-Ugric nations and languages. The communities are mostly found in Russia, Hungary, Norway, Sweden, Latvia, Finland and Estonia.

The welcome we received from the director of the park, Andrei Gorbunov, and local personality Turnina Svetlana, was fantastic. A guided tour of the region is highly recommended, with someone who can explain everything and take you right up close to experience the richness of the culture and history.

Another highlight was a visit inside a traditional cottage in the village of Yb, where the host Valentina kindly provided herbal tea and delicious local baking. You can’t get an experience more authentic than this.

Another activity, while admiring the colours and general beauty of the region’s forests, is to sample the juice from a birch tree, which is considered by many to be sacred. This is a popular drink for Russians, with the healing properties first talked about in ancient times.

In the territory’s capital, Syktyvkar, there are many tourist sites to visit, including the National Museum of the Komi Republic. This is a great chance to get more of a global picture about the history of the local people.

The museum also has a claim to fame: it displays the world’s oldest pair of skis, which are 8,000 years old, according to carbon dating tests carried out at the State Hermitage Museum.

There are lots of other artifacts on display, bearing witness to the long history of a people that had to survive harsh winters and short summers. The population of the Komi Republic is currently about 900,000.

Evidence of an ancient type of hunting calendar is also on display and a larger replica can be found outside in the city centre.

The museum has been open since 1911, a decade before the Republic of Komi was officially established.

The displays are grandiose, and a great deal of effort has gone into creating the atmosphere of the past. The artifacts date back centuries, with everything from precious accessories to everyday goods.

Don’t forget to check out the dazzling piece of artwork that shows the emblem of the Komi Republic. It was made in 2001 out of gold and diamonds mined in the territory.

The famous Russian abstract painter Wassily Kandinsky says he was greatly inspired by the colours and imagery he encountered during a journey to the Komi territory in the late 1800s, a trip he wrote about in personal diaries. Those influences can be seen in the museum.

And modern artists are still inspired by what they see in the Komi Republic. One of them is Yuri Lisovskiy, who moved to the territory from Ukraine.

Yuri specialises in what is known as an ethno-futurism style, which aims to make the myths and legends of the past accessible to the new generations.

Photos and text by Seamus Kearney

Postcards from Russia: the ancient people of Komi