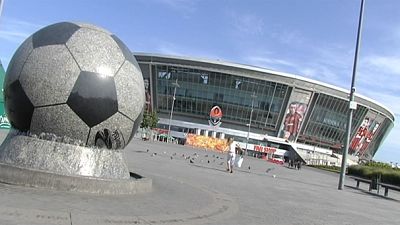 The European Championships are just around the corner and the Donbass Stadium is the pride of Ukraine. The hi-tech sports venue opened in 2009 after three years work.

The rest of the country is fighting against time to make up for the delays to complete all the facilities for the 2012 Championships.

Enthusiasm is the order of the day in Donetsk, the first Ukrainian city to complete all its sports facilities for Euro 2012.

Donetsk, the capital of the Donbass coal region, will host five matches, including a quarter final and a semi-final. Local authorities promise everything will be ready by April 2012.

The city has a new airport terminal, spruced-up public areas, it is building and refurbishing 57 hotels and dozens of roads. Nevertheless there are concerns over its ability to cater for all the fans.

“Donetsk is planning to accommodate all the guests except for the quarter-final and semi-final, when we’re going to use 20 charter flights from Kiev to Donetsk and back,” explained Alexander Lukyanchenko, the Mayor of Donetsk.

Communication will be a challenge for foreign fans. Residents will have to brush up their English as up to 40,000 fans are expected to flock to Donetsk for each match.

The city needs 2,000 English speaking volunteers. The selection process has just started and English conversation workshops with Ukrainian and Polish trainers have also kicked off.

“Here we are learning to be the faces of our city and learning how we can be useful for our city, and for tourists,” said one volunteer proudly showing off her English.

If their language skills are up to speed what of the other stadiums, will they be ready?

Euronews’ Monica Pinna reporting from the Olympic Stadium in Kiev says: “This is where the Euro 2012 final will be played. The work to refurbish the stadium, which was built in 1923, started in 2008. The authorities have assured us the stadium will be completed in time for the Ukraine-Germany match scheduled for this November.”

The delivery times for the main facilities have changed from year to year and month to month, giving Uefa more than a few headaches. Ukraine and Poland won the bid to co-host the tournament in 2007.

More than 40,000 people are working every day on the projects for the Euro 2012 championships.

It is a chance for Ukraine to be in the international spotlight at the highest level of sport.