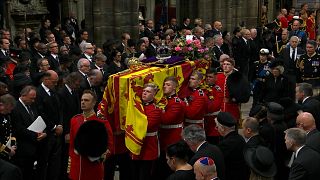 This week, the whole planet followed Queen Elizabeth II's funeral, whether on TV or social platforms.
For the ceremony, every aspect of Monday's events had been meticulously planned years if not decades in advance. The military personnel had rehearsed by moonlight to ensure everything went without a hitch.

At the same time, the Ukrainian city of Izium started emerging from the confusion and trauma of six months of Russian occupation.

In Tehran, Iran, protests and demonstrations took place after the death of a young woman, Mahsa Amini, while in police custody.

Finally, in the southern Indian city of Hyderabad, twenty people were injured in a stampede when thousands of people thronged counters selling tickets for an India-Australia Twenty20 cricket match. Nearly 30,000 people were waiting for only 3,000 tickets, and police were using batons to try and control the crowd.

Rescued migrants and more than a dozen dead arrive in Sicily

Lego for the Waterloo anniversary!

Nepal: one month after the deadly earthquake