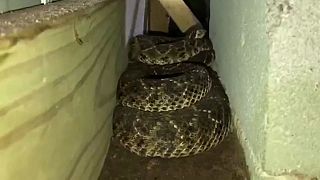 A Texas snake remover who was responding to a call about a "few" of the reptiles under a home found a startling 45 rattlesnakes.

Big Country Snake Removal responded to a home in Albany, Texas, after a man who was trying to restore his cable crawled under the house and saw some snakes.

"He saw a 'few' snakes and quickly crawled out," said a post on Big Country Snake Removal's Facebook page.

The post said the house and yard were clean, and the owners said they don't often encounter rattlesnakes.

The company ended up removing 45 rattlesnakes from beneath the house.