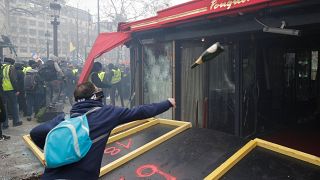 Rioters also set fire to an upmarket handbag store and two news-stands on the Champs Elysees avenue while scattered bonfires burned on the iconic thoroughfare.

Protesters lobbed cobblestones at riot police through clouds of tear gas in front of Paris' Arc de Triomphe monument, which was ransacked at the peak of the protests in December.

Police had arrested more than 150 protesters by late afternoon as demonstrators looted stores around the Champs Elysees and ransacked the high-end Fouquet's restaurant.

The canvas awning was later set on fire of the swanky brasserie, known in France as the place where conservative Nicolas Sarkozy celebrated his presidential election victory in 2007.