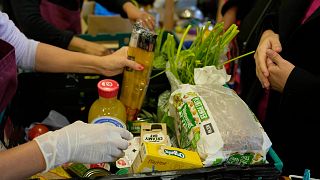 Oxfam International has sought for a decade to highlight inequality at the conclave of political and business elites in the Swiss ski resort of Davos.

In a new report aiming to provoke discussions on panels featuring corporate and government leaders this week, the NGO said the world has been beset with simultaneous crises, including climate change, the surging cost of living, Russia’s war in Ukraine and the COVID-19 pandemic, yet the world’s richest have gotten richer and corporate profits are surging.

Over the past two years, the world’s super-rich 1 per cent have gained nearly twice as much wealth as the remaining 99 per cent combined, Oxfam said.

Meanwhile, at least 1.7 billion workers live in countries where inflation is outpacing their wage growth, even as billionaire fortunes are rising by $2.7 billion (€2.5 billion) a day.

To combat these problems, Oxfam urged higher taxes on the rich, through a combination of measures including one-time “solidarity” taxes and raising minimum rates for the wealthiest. The group noted that billionaire Tesla CEO Elon Musk's true tax rate from 2014 to 2018 was just over 3 per cent.

Oxfam wants the idea to go further to include big food corporations, as a way to narrow the widening gap between the rich and poor.

“What we’re calling for is windfall taxes, not only on energy companies but also on food companies to end this crisis profiteering," Bucher told The Associated Press in an interview.

Oxfam's report said wealthy corporations are using the war as an excuse to pass on even bigger price hikes. Food and energy are among the industries dominated by a small number of players that have effective oligopolies, and the lack of competition allows them to keep prices high, the group said.

At least one country has already acted. Portugal introduced a windfall tax on both energy companies and major food retailers, including supermarket and hypermarket chains. It took effect at the start of January and will be in force for all of 2023.

The 33 per cent tax is applied to profits that are at least 20 per cent higher than the average of the previous four years. Revenue raised goes to welfare programs and to help small food retailers.

Oxfam said its analysis of 95 companies that made excess, or windfall profits, found that 84 per cent of those profits were paid to shareholders while higher prices were passed on to consumers.

What is Davos? Your guide to the World Economic Forum’s annual meeting

One-third of the world faces recession in 2023, IMF warns