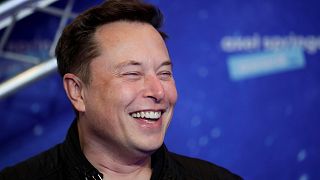 Twitter owner Elon Musk said he'll reinstate the accounts of several journalists suspended from the social media platform, after Musk accused them of endangering his family.

"The people have spoken. Accounts who doxxed my location will have their suspension lifted now," the billionaire tweeted.

The move came after Musk put up a poll, asking whether the journalists should be reinstated straight away or after a seven day suspension. Almost 59% of the 3.69 million people who took part in the poll said he should restore them immediately.

The United Nations and the European Union had condemned Twitter's decision Friday to suspend several journalists covering the social media platform and Musk himself.

Reporters for The New York Times, Washington Post, CNN and Voice of America were among those whose accounts were taken down. The official account for Mastodon, a decentralised social network billed as an alternative to Twitter, was also banned.

"We're very disturbed by the arbitrary suspension of accounts of journalists that we saw on Twitter," said UN spokesman Stephane Dujarric.

“The move sets a dangerous precedent at a time when journalists all over the world are facing censorship, physical threats and even worse".

Some accounts appeared to have been reactivated, such as that of former Vox journalist Aaron Rupar.

"I was pretty bummed about getting suspended initially, but quickly realized it'd be fine because I'm blessed to have an amazing online community," Rupar tweeted, thanking people for their support.

The controversy began on Wednesday when Elon Musk announced that he was suspending @elonjet, an account that automatically reported on his private jet trips. Some accounts then tweeted about the decision.

Elon Musk justified the suspension of the accounts by saying that they endangered his safety and that of his family.

He had claimed in a tweet on Wednesday that a vehicle with one of his children in it had been tracked in Los Angeles by "a crazy stalker", appearing to create a causal link to the real-time positioning of his jet.

"They posted my exact real time location, which is literally the coordinates for an assassination, in direct (and obvious) violation of Twitter's terms of service," he also claimed.

Gaffe as Twitter mixes up Norway and Nigeria on government accounts