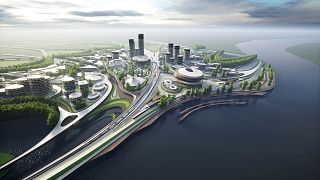 What do a strip of abandoned land, a former Czech politician, and virtual reality (VR) have in common? The answer is the self-declared Balkan micronation of Liberland.

First founded in 2015, it’s poised to further its ambitions of statehood with the development of a brand new metaverse.

Liberland will be the first country to be built and inhabited in the virtual world first in anticipation of its realisation in real life.

What’s more, world-renowned architectural firm, Zaha Hadid Architects, has been working on a vision for a virtual city that will provide a home for the swelling ranks of the country’s citizens.

Although it isn’t a formally recognised country, Liberland has 7,000 approved residents with 700,000 more applications for citizenship being processed.

Wedged between Serbia and Croatia, the 7 km2 territory - which is larger than Vatican City or Monaco - is disputed land and claimed by neither country.

Liberland has been steadily growing its international reputation since its foundation by former Czech MP - and the micronation’s current president - Vit Jedlička and his partner Jana Markovicova.

Prior to 2015, libertarian Jedlička had worked in his home country to create what he envisioned as a new society that was not hampered by the trappings of the old. Despite huge efforts, he encountered too many barriers.

"At that point, I realised it might be easier to start a new country than change an existing one," he told Euronews Next.

Once, this radical and inspiring thought took hold, the couple literally turned to Google to search for land that might serve their purpose.

The result was a sliver of forgotten land on the west bank of the Danube and so a new nation, the Free Republic of Liberland, was born.

Since the breakup of the Socialist Federal Republic of Yugoslavia, a border dispute has existed between Croatia and Serbia, with both sides presenting conflicting claims to various territories along the Danube.

We are building a country that can serve as a good example for other countries. The biggest improvement is that, in Liberland, taxes are voluntary, and people are rewarded when they pay them.

However, the area Jedlička found along the west bank of the river had not been claimed by either Croatia, Serbia, or any other country and was therefore in a state of terra nullius, in other words, a no man’s land.

That is until Jedlička - the current president of the provisional government - and the other founders of Liberland laid claim to the territory on April 13, 2015.

"We are building a country that can serve as a good example for other countries. The biggest improvement is that, in Liberland, taxes are voluntary, and people are rewarded when they pay them," Jedlička said.

"We founded Liberland on April 13, 2015, to celebrate the birthday of Thomas Jefferson. We wanted to invoke the spirit of the American Revolution. We also want to combine the best elements of the American republic, Swiss democracy, and the meritocracy of Singapore. We want to put our system on the blockchain so that the government will work in a modern and transparent way".

The first is a population, the second a defined territory, the third a government, and finally the capacity to enter into international relations with other states.

It’s on this first point that the president of the nascent country really sees the strength of support for Liberland’s claim for statehood.

Designing a virtual country in the metaverse

By partnering with Zaha Hadid Architects to create a metaverse, Liberland is creating a space for its thousands of citizens to meet without having to travel to that tiny, and as yet, uninhabited piece of land.

Indeed, it might be a much safer option for its would-be citizens as visitors are not then exposed to the threat of possible arrest by Croatian Police.

Patrik Schumacher, Zaha Hadid’s principal architect, is a long-term supporter of Liberland and has presided over previous architectural competitions to create a vision for a physical Liberland.

By looking at a metaverse, he is providing an alternative and immediate way of allowing Liberland citizens to enter the micronation.

Schumacher - the brains behind parametricism, a concept first coined back in 2008 which basically reinvented architecture’s relationship with computer technology and algorithms - is a legend in the industry.

He recently published his '12 Theses on the Advent of the Metaverse,' his vision of what the virtual world will be like.

Schumacher's primary thesis is that the metaverse will deliver vivid telepresence, co-location synergies, explorative browsing, immersiveness, collective experiences, and so on.

The uptake of this opportunity will be universal as all websites will spatialise, all organisations will move into the metaverse, and all physical venues will be augmented or substituted by functionally equivalent virtual venues.

His second thesis is that the metaverse is a single reality.

"Physically and virtually mediated social communicative interactions are equally significant and together form an undivided continuous social reality. There will be both competition and cooperation within and across these realms".

But he really kicks into gear with his seventh and eighth theses which he calls the "Architect’s Take Over" and "Architecture’s Essence Distilled".

Architects as creators of the metaverse

"In the coming age of VR-empowered cyberspace,  it will be architects and no longer graphic designers who will design the coming 3D immersive internet: the metaverse," Schumacher wrote.

"This expansion of architecture’s remit will further distill the discipline’s essence and core competency, namely the spatial-visual ordering of communicative interaction, upgraded via investment into the subdisciplines of spatiology, phenomenology, semiology, and dramaturgy".

In many ways, it makes sense to finally bring architects into the metaverse if we are to create cities that make sense rather than just look pretty.

And it would appear it takes a new country, built on an absence of bloodshed, to seriously engage with trad-architecture and to bring it into de-architecture.

"Architecture is UI/UX for the built environment, a field that is deeply engaged in systems thinking, and that has many commonalities with communication and web design. Architects are strategists of spatial social functionality and communication," Daniela Ghertovici, founder of ArchAgenda, explained.

Architects are best positioned to strategise and design urban environments in the metaverse, she addded.

"We focus much energy on creating physical environments for social interaction and productivity, and we are now entering the realm of UX design for complex real-time multi-user interaction in Virtual Reality platforms. Architects understand how to connect 3D space with social networking".