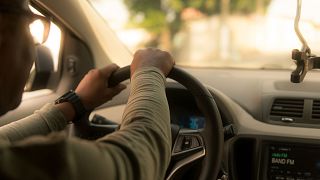 A former executive at Uber has detailed how the company was "weaponising drivers" in its various fights against government regulation around the world, calling their practices “undemocratic and unfair” and “if not illegal, certainly unorthodox”.

Mark MacGann is the man behind the so-called "Uber files" - a trove of documents leaked to newspapers that revealed the attempts the ride-hailing company made to influence policy and fight against stronger worker protections.

Speaking at Web Summit in Lisbon in his first in-person interview since the revelations were published this summer, he alleged that the company “broke laws,” “evaded police” and “exploited violence against drivers”.

MacGann worked as a lobbyist for Uber between 2014 and 2016, building relationships with governments across Europe and elsewhere in an attempt to influence legislation.

After leaving the company, he told the Guardian newspaper that he decided to speak out because he knew Uber had flouted laws in “dozens of countries” and misled its drivers and the public about its gig-economy model.

The leak consisted of more than 124,000 files, including presentations, briefings, security reports, emails, messages and chat exchanges, much of which was between the company’s top executives at the time.

"We knew we were breaking laws… we were actually breaking democracy itself," he said at Web Summit on Wednesday.

While Uber spread rapidly around the globe, legacy taxi drivers started protesting as their livelihoods were put at risk - and Uber drivers were sometimes caught in the crossfire.

Uber had "unprecedented access to the very highest levels of power," MacGann said, claiming the company thought it “knew better than governments”.

"The rules were bad, and governments needed to get out of the way," he said.

Last week, he spoke at the European parliament where he told MEPs that "when politicians tried to stop us or slow us down, we co-opted democracy itself, by leveraging consumers' political power, putting very public pressure on elected officials to back off, drowning them in millions of rider petitions”.

"We told politicians that we would agree to stop the controversial illegal UberPop service if they change the law in the way that we wanted. We weaponised our drivers and we weaponised our customers".

During that appearance, trade unions demonstrated outside the parliament, protesting against lobbying tactics from tech companies.

Ludovic Voet, Confederal Secretary at the European Trade Union Confederation (ETUC), told Euronews the "Uber files" show that “Uber has escape strategies to not respect the rules and that they also have had contact with politicians, and that they are lobbying hard to avoid legislation”.

The trade union accused the company of unfairly influencing an EU directive that aims to strengthen the rights of platform workers.

As MacGann put it, lobbyists at big tech companies like Uber are "trying to weaken labour protections for people at the bottom of the economic chain".

Meanwhile, a former European Commissioner is under investigation by the EU’s anti-fraud agency, OLAF, for her ties to Uber.

Nellie Kroes served as European Commissioner between 2004 to 2014, as an antitrust chief, and then as digital chief.

She is being investigated for allegedly lobbying on behalf of Uber during her "cooling-off" period during which former commissioners are supposed to remain neutral following their term in office.

MacGann told the attendees at Web Summit that "Uber is an amazing company, mostly. It is filled with great people, mostly".

"Why did it have to be up to me to speak up, to blow the whistle, to be revealed as the source of the Uber files, when so many other people stayed quiet and so many governments and regulators turned a blind eye?" he asked.

He believes more employees at big tech companies are going to be ready to speak out about unethical practices than would have been willing in the past.

The company, which has replaced many of its senior executives since 2017, said in a statement: "We have not and will not make excuses for past behaviour that is clearly not in line with our present values. Instead, we ask the public to judge us by what we’ve done over the last five years and what we will do in the years to come".