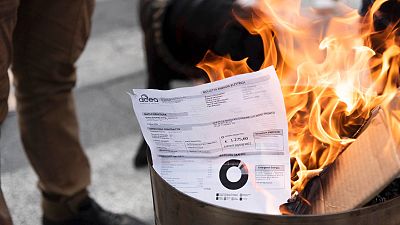 Spiralling inflation has sparked a cost-of-living crisis across Europe, and governments are stepping in to try to shield households and businesses from the seemingly never-ending surge in energy prices.

For many families these days, it feels like paycheques are immediately evaporating as inflation drives up the cost of groceries and fuel, landlords increase rent and utility bills keep soaring.

Inflation in the eurozone continued to hover near record highs at 9.9 per cent in September, up from 9.1 in August, fuelled by rising energy prices.

There's no sign of the energy crisis improving, as Russia said in September it would not fully resume its gas supplies to Europe until the West lifts the sanctions it imposed on Moscow over its invasion of Ukraine.

Belgian prime minister Alexander De Croo has warned Europe could face up to 10 difficult winters as a result of the standoff.

European Union member states are largely responsible for their national energy policies, and EU rules allow them to take emergency measures to protect consumers from rising costs. Here's a look at what governments across the continent are doing to help.

As the UK emerges from a chaotic few weeks during which the newly-formed government of Liz Truss quickly collapsed, it's likely that new measures will soon be put in place to address the growing crisis within the British economy.

But as things stand, the country's Energy Bills Support Scheme remains in place: the country is offering £400 (€457) off energy bills for households in six instalments between October and March next year.

Shops and pubs will benefit from financial help on their energy bills beyond the initial six-month period.

A cap on electricity prices introduced by Truss and her first Chancellor of the Exchequer Kwasi Kwarteng was significantly cut back by Kwarteng's replacement Jeremy Hunt. Where Truss had said that the average household in the UK "will pay no more than £2,500 (€2,857) per year for each of the next two years," Hunt limited this energy price guarantee only until April next year.

Households that are already struggling to make ends meet and have already received government benefits will also get a one-off "cost of living" payment of £650 (€743) on top of the £400 (€457) discount, and pensioners will receive an extra payment of £300 (€343) this winter.

People with disabilities are also set to receive a payment of £150 (€171) to cover the increased cost of living.

Italy unveiled an aid package worth some €14 billion in September to shield firms and families from surging energy costs. It comes on top of €52 billion budgeted since January to fight the cost of living crisis.

The government also outlined a €150 handout for 22 million workers and pensioners with an annual income below €20,000.

Italy has also announced its intention to tax companies profiting from higher energy prices and is promoting a cap on gas prices at a European level to help contain price spikes.

Like Portugal, Spain currently enforces a one-year-long cap on gas prices, agreed by the European Commission, which ensures they remain lower than an average of €50 per megawatt-hour.

The country is also offering a one-off payment of €200 for citizens who earn less than €14,000 a year and do not receive any other benefits.

But France has stepped up its game at the source, moving to fully nationalise energy provider EDF and forcing it to limit electricity wholesale price rises.

The government now says it will cap power and gas price increases for households at 15 per cent in 2023. It says the average monthly household energy bill will cost an extra €20-25 as a result, compared to an extra €180-200 without such a cap.

In June, Danish lawmakers agreed on a cash handout to the elderly and other measures totalling 3.1 billion Danish kroner (€417 million), including a cut to a levy on power prices.

The parliament has also approved a so-called "heat cheque" worth 2 billion Danish kroner (€269 million) that will be paid to over 400,000 households hit hard by rising energy bills.

Germany, which has struggled to curb its heavy dependency on Russian gas, will pay this December's monthly gas bill for every household and small-to-medium business in the country. The one-off payment is part of a two-stage plan to cushion German citizens from surging energy bills.

The measure was approved by a government-appointed pool of experts which also recommended a cap on gas and heating prices.

Germany had previously pledged to lower the value-added tax on natural gas from 19 per cent to 7 per cent until the end of March 2024.

On October 21, the German parliament approved a gas price relief fund worth €200 billion put forward by chancellor Olaf Scholz to help its citizens with rising energy prices. It will allow households to benefit from a price cap of 80 per cent of their usual consumption, starting in March.

As of November 1, electricity and gas prices in the Netherlands will be capped for all households in the country, reverting to those of January 2022 below a certain threshold of consumption.

The Dutch government is also offering lower-income households a one-off energy allowance of €1,300, while all households will receive a discount of €190 on their energy bills in November and December.

VAT on energy has been cut from 21 per cent to 9 per cent and the excise duty on petrol and diesel by 21 per cent.

Greece has devoted about €9 billion in power subsidies and other measures since last September to help households, businesses and farmers pay their electricity and gas bills.

The subsidies are designed to absorb around 90 per cent of the rise in monthly power bills for households and small and medium-sized firms.

According to a scheme introduced by the government in 2021, Norwegians only pay bills in full when prices are under 70 crowns (€7) per kWh. When energy bills pass that threshold, the government covers 90 per cent of the total. The scheme is set to remain in place until at least March 2023.

Bulgaria in May approved a 2 billion levs (€1 billion) package aimed at shielding companies and low-income consumers from the surge in energy and food prices caused by the conflict in Ukraine.

Since July, the government is also offering a discount of 0.25 levs (€0.13) per litre of petrol, diesel and liquefied petroleum gas, and methane until the end of the year and it’s scrapping excise duties on natural gas, electricity, and methane.

Finland's government said in September it would slash VAT on electricity to 10 per cent from 24 per cent over the winter months, from December to April.

It also plans to offer up to €10 billion of liquidity guarantees to the energy sector to help prevent a financial crisis. "The government's programme is a last-resort financing option for companies that would otherwise be threatened with insolvency," said Prime Minister Sanna Marin.

Hungary has capped retail fuel prices at 480 forints (€1.19) per litre since last November, well below current market prices. The measure led to such an increase in demand that the government was forced to curb eligibility for the scheme.

Sharp rises in gas and electricity prices have also forced the government to curtail a years-long cap on retail utility bills, setting the limit at national average consumption levels, with market prices applying above that.

Hungary has also imposed an export ban on fuels and recently loosened logging regulations to meet the increased demand for solid fuels such as firewood.

Poland has announced tax cuts on energy, petrol, and basic food items, as well as cash handouts for households. It has also extended regulated gas prices for households and institutions like schools and hospitals until 2027.

The government in July agreed on a one-off payment of 3,000 zlotys (€633) to households to help cover the rising cost of coal. Prime Minister Mateusz Morawiecki has said the total cost of curbing energy prices in Poland will reach around 50 billion zlotys (€10.5 billion).

The Polish government has also announced it will freeze electricity and gas prices for next year at this year's level, with a limit of 2,000 kilowatts per hour for most households in the country. Families with three or more children and people with disabilities will have a higher threshold.

There's also an incentive for saving energy: households that cut their electricity use by 10 per cent next year compared to this year will be rewarded with a 10 per cent price cut.

Romania's coalition government has implemented a scheme capping gas and electricity bills for households and other users up to certain monthly consumption levels, and compensating energy suppliers for the difference. The scheme is due to be in place until March 2023.

Sweden has set aside 6 billion Swedish crowns (€559 million) to compensate households worst hit by the surge in electricity prices.