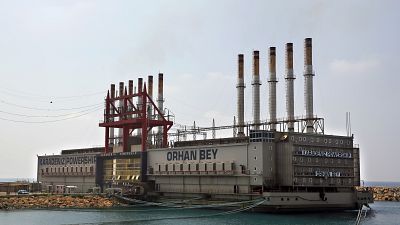 Europeans have been lulled by unusually warm temperatures this October, which have allowed them to postpone the dreaded day they’ll have to turn the heating on and face higher energy bills than they have seen in decades.

But a dark winter is looming over Europe, as soaring energy prices and shortages cast doubt over whether countries will be able to keep the light on - and homes heated - in the coming months.

Desperate times call for desperate measures, and Europe is now doubling down on emergency infrastructure that would allow it to face the scary times ahead, including a more novel solution - so-called “powerships”.

Massive floating power plants which look exactly like average land power stations besides the fact that they’re sailing on the ocean, powerships have been around for years. The first one was built in 1931 in the US by converting a ship into a floating electricity plant which could move from place to place where power was needed.

Nowadays, powerships are used to produce electricity for millions of customers on land in countries where blackouts and power outages are unfortunately common, with most floating power plants being deployed in developing countries in Africa and Asia. In Europe, powerships are still a rare sight.

But that might not be true for long. Turkish company Karpowership, one of the world’s largest powership builders, operators and owners, is reportedly in talks with four EU member states for the supply of floating power plants with a 2 gigawatts capacity.

“If we can get over the bureaucracy, the documentation, then hopefully we will be generating electricity at a very low cost while within EU environmental regulations,” Zeynep Harezi, Karpowership’s chief commercial operations officer said in a recent interview.

According to Karpowership, powerships could save Europe between 30 and 60 per cent on gas costs and generate 2,000 medium voltage (mV) of power. Connecting such floating power plants to European countries’ grids would take only 30 days, says the company.

Harezi didn’t reveal which four countries have asked for the powerships, but said that the floating power plants could be ready to dock off European ports already in December.

The company has eight energy ships available, with a total capacity of 2 gigawatts, which could help Europe fill the void left by the energy supply provided by Russia before the country invaded Ukraine.

In September, a spokesperson for Germany’s economy and climate ministry said that the country was looking into powerships to provide additional energy and avoid blackouts.

Extremely flexible and mobile, these massive floating power plants running on oil are capable of being where they’re needed the most, docking in any city’s harbour, cranking up their turbines and plugging into national grids.

On the downside, the powerships burn liquefied natural gas, low-sulphur fuel or biodiesel to run - something that would set the European climate agenda back in the face of soaring energy costs.