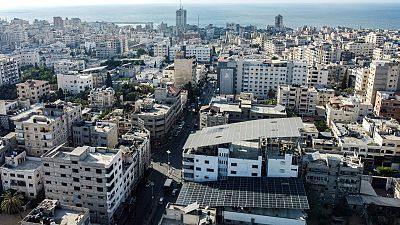 Aerial view of solar panels placed atop a bakery building used to power it, in Gaza City in the Palestinian enclave.   -   Copyright  MOHAMMED ABED / AFP   -
By Oceane Duboust  with AFP  •  Updated: 04/10/2022

Blockaded by Israel since 2007, the Gaza Strip only has electricity for 12 hours per day on average - less when the conflict escalates.

So, in recent years, people across the Palestinian enclave have been turning to solar energy to power their businesses and homes.

"Electricity is the backbone of the project. We rely on it to provide oxygen for the fish, in addition to drawing and pumping water from the sea. Without electricity, our project is dead”, he told the AFP news agency.

Not only is solar power more sustainable than traditional energy sources, but it’s also proving cheaper.

The Gaza Strip is powered by a sole power plant which has been damaged by years of conflict.

For most of its 2.3 million residents, living under Hamas Islamist rule and a 15-year-old Israeli blockade, power cuts are a daily fact of life,

To deal with blackouts, many switch on diesel generators. But more and more people are now turning to renewables to keep the lights on.

This year, he invested in about 100 solar panels fitted on the bakery’s roof, taking out a four-year loan to finance his project.

The next step for him is to import electric ovens from Israel to power them with solar energy.

Are solar panels a good investment?

Solar energy installations in Gaza are often supported by foreign investments and NGOs.

For example, the World Bank launched in 2018 the Gaza Solar Revolving Fund. The United Nations also has an ongoing project to provide electricity to four hospitals in the Gaza Strip thanks to photovoltaic panels.

According to the journal Energy, Sustainability and Society, 20 per cent of households in Gaza now rely on solar energy.

"Over the past two years, entrepreneurs have turned to solar energy because it saves (money) and is a profitable investment," said Shehab Hussein, an engineer at local solar kit company MegaPower.

According to him, solar panels can be installed for a starting price of around €1,000.

Most of the solar tiles used in Gaza come from China. With a minimum of maintenance, they can be used for several years, but their batteries must be changed every two or three years.

Raya al-Dadah, head of the Sustainable Energy Technology Laboratory at the University of Birmingham in the UK, says that the solar panels her family uses in Gaza are over 15 years old, so they are no longer new, but, she says, "the water in the shower is still very hot”.

The installation of standard panels to heat water is relatively simple though the existing installations are also at risk of being destroyed by the conflict.

Dadah also has had difficulty importing more sophisticated technology, mainly because of restrictions imposed by Egypt and Israel, which control the entry points to Gaza.

Among the new features are rotating panels that follow the path of the sun to optimize energy supply. More expensive, cutting-edge technology has been developed by the Israeli company SolarGik, thanks to a device that monitors weather conditions.

"This system allows us to produce 15 to 20 per cent more electricity than standard panels," Gil Kroyzer, the group's CEO, told AFP, stressing that these panels should one day be able to "predict the weather" thanks to artificial intelligence.

"The revolution is underway (...) but we need better ways of storing solar energy before we can replace fossil fuels”.

In the meantime, Raya al-Dadah believes that conventional panels provide a "really promising source of energy that is available everywhere".