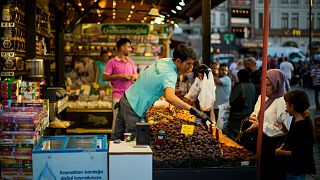 If you’re living in Europe and feeling squeezed by double-digit inflation, spare a thought for your Turkish counterparts.

The cost of essential goods is soaring and hurting households already facing high energy, food and housing costs. The Turkish Statistical Institute said consumer prices rose by 3.08 per cent from the previous month.

Worse, experts say Turkish inflation is much higher than official statistics, and the independent Inflation Research Group put the annual rate at an eye-watering 186.27 per cent.

And while most Western countries are in the process of raising interest rates to keep inflation in check, Turkey is doing the exact opposite.

The lira has lost over 50 per cent of its value against the US dollar since the central bank began cutting rates last year.

Russia’s invasion of Ukraine and the lira’s decline have, in turn, further stoked inflation.

The government says it hopes to lower interest rates to boost production and exports in a bid to reach a current account surplus. Erdogan has said he expects inflation to fall in the new year.

The sharpest increases in annual prices were in the transportation sector, at 117.66 per cent, followed by food and non-alcoholic drinks prices at 93 per cent, according to the statistical institute’s data.