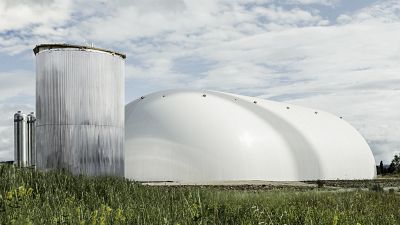 Though ridding the atmosphere of carbon dioxide is one of the main battles in the fight against climate change, one Italian start-up has found a way to turn CO₂ into a weapon against global warming.

The company has been developing an emission-free storage method that stores power generated from the sun and wind. CO₂ plays a useful role in the process as it has properties that can help to store electricity from renewable energy sources when it is converted from gas to liquid.

The storage technology could prove to be a game changer in the way solar and wind power are used, as they are variable energies that are only generated when there is sunshine or wind.

“The issue with renewable energy is that those sources of energy are very clean, but they are also intermittent and cannot be dispatched,” Energy Dome founder and CEO Claudio Spadacini told Euronews Next.

“The missing technology to make renewable energy dispatchable 24/7 is a technology which is able to store solar when the sun shines and when the wind blows and can deliver (energy) back to the grid when the sun doesn't shine”.

This method, which has never been used before, stores energy using pressure and heat.

The process begins by storing CO₂ gas, secured from commercial vendors, in a big sealed dome. When energy is fed into the system, it pushes the gas through a compressor to condense it into liquid, while the heat from this compression is captured and stored to be used again later.

When it is time to discharge the energy, the heat that was stored is used to evaporate the liquid CO₂ again, and its expansion - as it turns into gas and returns to the dome - drives a turbine that generates energy.

Though it sounds complicated, the method only requires steel, CO₂ and water, and the closed-loop system generates no emissions.

“Ironically, we use CO₂ to make our system work. It is just the fuel which we use to make our technology work,” Spadacini said, adding that it’s only needed to kick-start the system, which is designed to last around 30 years.

“Our system is fully closed, we have no emissions in the atmosphere. It's just a black box which is able to charge with the surplus electricity when there is an abundance [of it]”.

To generate and dispatch electricity in times of demand, the same liquid CO₂ is heated up and converted back into a gas that powers a turbine, which generates power in a closed thermodynamic system.

The other advantage of this technology is that it does not rely on lithium-ion batteries, which are often used for energy storage. The process also does not use any rare earth minerals such as cobalt.

“To be independent of minerals and rare material is a big advantage also from the point of view of energy security, but also in terms of geopolitical stability,” said Spadacini.

The founder said Energy Dome’s first full-scale storage plants should cost just under $200 (€180) per kilowatt-hour, which is also about half the price of a lithium-ion energy storage system.

The island of Sardinia is the perfect home for the 20MW-200MWh plant with an abundance of sunshine and wind. The facility also juxtaposes two coal-fired power plants on the island, which are being phased out.

“The demonstration of solar power storage in a sustainable way in that place can [allow] Sardinia to be the first fully green island in Europe,” said Spadacini.

The company is now getting ready to deploy its first full-scale plant by the end of next year.