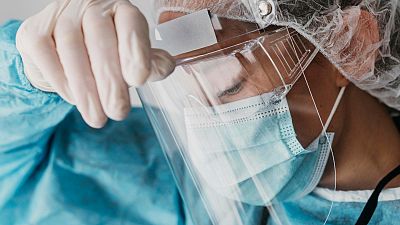 The scientists believe the new Russian bat virus could be more harmful than COVID and resistant to current vaccines.   -   Copyright  Canva
By Natalie Huet  •  Updated: 23/09/2022

When SARS-CoV-2 - the virus behind COVID-19 - surfaced in China and quickly brought the entire world to a standstill, then-President Donald Trump liked to refer to it as "the Chinese virus".

Fast forward two and a half years, and US scientists are warning that a recently discovered virus harboured by Russian horseshoe bats is also capable of infecting humans and evading COVID-19 antibodies and vaccines.

The bat virus, named Khosta-2, is known as a sarbecovirus – the same sub-category of coronaviruses as SARS-CoV-2 – and it displays "troubling traits," according to a new study published in the journal PLoS Pathogens.

A team led by researchers at the Paul G. Allen School for Global Health at Washington State University (WSU) found that Khosta-2 can use its spike proteins to infect human cells very much like SARS-CoV-2 does.

"Our research further demonstrates that sarbecoviruses circulating in wildlife outside of Asia – even in places like western Russia where the Khosta-2 virus was found – also pose a threat to global health and ongoing vaccine campaigns against SARS-CoV-2," Michael Letko, a virologist at WSU and corresponding author of the study, said in a statement.

He said this discovery highlights the need to develop new vaccines that don’t only target known variants of SARS-CoV-2, such as Omicron, but that protect against all sarbecoviruses.

Among the hundreds of sarbecoviruses discovered in recent years, most have been found in Asian bats and are not capable of infecting human cells.

The Khosta-1 and Khosta-2 viruses were discovered in bats near Russia’s Sochi National Park in 2020, and it initially appeared they were not a threat to humans, according to the study’s authors.

...there are other viruses like Khosta-2 waiting in those animals with these properties we really don't want them to have, it sets up this scenario where you keep rolling the dice until they combine to make a potentially riskier virus.

"Genetically, these weird Russian viruses looked like some of the others that had been discovered elsewhere around the world, but because they did not look like SARS-CoV-2, no one thought they were really anything to get too excited about," Letko said.

"But when we looked at them more, we were really surprised to find they could infect human cells. That changes a little bit of our understanding of these viruses, where they come from and what regions are concerning".

Fortunately, the authors believe that the new virus lacks some of the genetic features thought to "antagonise" the immune system and contribute to disease in humans – but there is a risk that Khosta-2 could wreak havoc by recombining with a second virus such as SARS-CoV-2.

"When you see SARS-2 has this ability to spill back from humans and into wildlife, and then there are other viruses like Khosta-2 waiting in those animals with these properties we really don't want them to have, it sets up this scenario where you keep rolling the dice until they combine to make a potentially riskier virus," Letko said.

Letko and his colleagues determined that Khosta-1 posed a low risk to humans, but Khosta-2 was more concerning.

In particular, like SARS-CoV-2, Khosta-2 can use its spike protein to infect cells by attaching to a receptor protein, called angiotensin-converting enzyme 2 (ACE2), which is found throughout human cells.

Unfortunately anybody researching bat viruses these days is subject to conspiracy theories.

The scientists next wanted to find out whether the virus could evade the immunity offered either by previous coronavirus infections or COVID-19 vaccines.

Using serum from people who were infected with the Omicron variant, the team found their antibodies were ineffective against this virus.

They also tested serum derived from people vaccinated against COVID-19 and foundKhosta-2 was not neutralised by current vaccines either.

"In this experiment, we combine virus (or in our case, virus-like particles) with serum from people that have received the Moderna or Pfizer vaccines and then add that to cells in test tubes," Letko told Euronews Next.

"If antibodies in the serum from the vaccinated person can bind onto the virus, then the virus cannot infect the cells – we can measure that".

However, he added it's not that surprising that COVID-19 vaccines cannot effectively stop Khosta-2 from infecting cells, given how different both viruses are.

How fast can COVID vaccines be adapted?

Letko also noted these results are from cell culture experiments, "so we cannot say with 100 per cent certainty that these responses truly mimic a real infection in a person".

"It may be possible that the immune response in a real person would be more diverse and effective than this simplified experimental system we use," he said.

This uncertainty around the immune response makes it difficult to say if and how fast current COVID vaccines could be modified to tackle this new virus, he added.

"A goal of this work is to provide a better idea of how widely distributed are these types of virus threats, underscoring the idea they are not just in China or even just in Asia," he said.

Flies on food aren’t just a nuisance. They're dangerous to your health