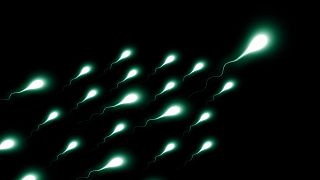 For generations, male contraception has been limited to two options: wearing condoms or having a vasectomy. It can hardly be called a choice, especially as vasectomies are generally a permanent procedure.

In comparison, when it comes to reversible forms of birth control, women are able to choose between a dozen methods ranging from the pill to hormonal injections, an implant, a patch, an intrauterine device (IUD), a diaphragm, a vaginal ring, female condoms or spermicide.

Granted, the scenario that contraception seeks to avoid is a woman getting pregnant, and it sounds easier to prevent an ovary from releasing an egg or two - or to create a barrier around them - than to try to disable the millions of sperm trying to swim to them.

Yet scientists have been working on developing new male contraceptives for decades, and the recent Supreme Court decision overturning the constitutional right to abortion in the United States is fuelling new interest in the topic.

"People are thinking ‘this is the reality now: how can we protect women from unintended pregnancies?'” Heather Vahdat, executive director of the Male Contraceptive Initiative, which helps fund research in this field, told Euronews Next.

It’s not just in the US. Around the world, surveys suggest a growing number of men are keen to help relieve their female partners of the burden of birth control.

A 2018 YouGov poll found that 79 per cent of the 1,600 British men surveyed thought contraception should be a shared responsibility.

So, what options might men have in the future? Here’s a look at some of the most promising methods in the pipeline.

Earlier this year, scientists at the University of Minnesota said they had developed a male contraceptive pill that is 99 per cent effective in mice without causing side effects.

The team, which received funding from the National Institutes of Health and the Male Contraceptive Initiative, aims to begin human trials in the coming months.

But Vahdat warned that getting a male birth control pill to market would take “easily five to 10 years”.

That’s because clinical trials must not only demonstrate that the product works in preventing pregnancies, but also that it’s fully reversible, meaning that couples who’ve used it and subsequently want a child do manage to get pregnant.

Researchers have also been working on a male contraceptive pill containing dimethandrolone undecanoate, or DMAU.

Such side effects may sound familiar to the millions of women who take a birth control pill, but they’ve gotten in the way of bringing male birth control to market.

A promising study commissioned by the World Health Organization (WHO) into a two-hormone injection designed to lower sperm count was halted a decade ago after safety reviewers judged it had too many side effects, particularly mood changes.

Interestingly though, 75 per cent of the 320 men enrolled in the trial said they wanted to continue using the shot.

Researchers have since been working on ways to tinker with other hormones to trick the body into thinking that testosterone levels are adequate and limit side effects.

Now here’s a way in which men could literally shoulder more of the burden of birth control: by applying a testosterone gel daily on their upper arms and back.

The gel, called NES/T, contains both testosterone and a progestin, a synthetic form of the female sex hormone progesterone.

The progestin blocks natural testosterone production in the testes, reducing sperm production to low or nonexistent levels. The replacement testosterone aims to maintain normal sex drive and other hormone-driven functions.

The effectiveness of the gel is being evaluated around the world in Phase 2 clinical trials funded by the US National Institutes of Health that aim to enroll over 400 couples in total.

Professor Richard Anderson from the University of Edinburgh, where 30 men have already completed the trial, said the results so far were very encouraging.

Vahdat said the shoulder gel was “really leading the pack” in terms of clinical data, and that participants are asking to be re-enrolled as the study advances.

“People are driving from other states to be able to participate in the trial. The demand is huge and they've had really good results so far”.

Régine Sitruk-Ware, a distinguished scientist at the Population Council’s Centre for Biomedical Research leading the NES/T study, said the shoulder gel appears to have a key advantage: reliability.

"When it's used daily, it remains on the surface of the skin and then delivers steadily," she explained. "And we see it at an effective dose for up to three days, which means that if there is one day off, and the person has forgotten to apply it, there’s a kind of forgiveness".

But hold your breath. Here again, MCI doesn’t expect it to reach the market for at least another five to 10 years.

The reversible vasectomy: 'Set it and forget it'

As women become increasingly reticent to hormonal forms of birth control, those advocating research into new male contraceptives say non-hormonal methods could be a smart bet.

These include so-called "vas-occlusive techniques" - or reversible vasectomy.

It works by implanting a gel into the vas deferens (the duct inside the penis through which sperm leaves the body) that allows fluid to flow but stops sperm from travelling.

It’s being developed as a one-time outpatient procedure that can last several years, either until the gel naturally starts dissolving or until the man decides to have it removed to allow his sperm to roam freely again.

For over four decades, scientists in India have been looking into a vas-occlusive synthetic gel called RISUG ("reversible inhibition of sperm under guidance") that's currently the only male contraceptive in Phase 3 clinical trials.

Studies have shown it to be effective, but only animal trials have so far fully demonstrated the product’s potential to be reversed. A water-based gel called ADAM, developed by the company Contraline in the United States, also started first-in-human trials this year.

"It’s not as daunting as it may seem," said Vahdat of MCI, which is helping fund the study.

"It’s like a male IUD: a long-acting reversible contraceptive for men. You set it and forget it".

More trouble than it’s worth?

Whether they sound promising or unsettling, these new options are still years away from becoming a reality for men worldwide.

So why is it taking so long? "It really has been funding," said Vahdat.

People are knocking on our doors, but none of them have cheques in hand

Case in point: her non-profit, MCI, is the second-largest funder of research into male birth control after the National Institutes of Health, with just $1.5 million (€1.5 million) in grants each year - a drop in the ocean of drug research.

“That’s the one thing that hasn't increased. People are knocking on our doors, but none of them have cheques in hand,” she said.

"If you think of taking a healthy patient, disabling a function (reproduction) and promising it can be restored, that’s more risky in terms of return than treating a disease," Vahdat explained.

From a regulatory perspective, it’s also somewhat of an ethical headache to give someone a medication with potential side effects if the end goal - preventing pregnancy - does not affect their body but their partner’s.

Those calling for more male birth control options say that way of thinking needs to be turned on its head.

"We propose a model of shared risk that is ethical because you are preventing the risk of pregnancy in a female partner, and we're considering the sum total of risk between male and female partner," said Logan Nickels, research director at MCI.

Taking matters into their own hands

While this idea has yet to win over health regulators and companies, it may be catching on more quickly among the general population.

"A few decades ago, people were simply grateful there were contraceptive methods. Now people realise it’s also a burden, and it’s more about sharing responsibility," said Anderson, of the University of Edinburgh’s Centre for Reproductive Health.

A few decades ago, people were simply grateful there were contraceptive methods. Now people realise it’s also a burden, and it’s more about sharing responsibility

"A number of men do want to step up to the mark".

In France, a thermal ring called Andro-Switch designed to bring the testes closer to the body to naturally raise their temperature and temporarily slash sperm counts made headlines last year when it was pulled from the market by the National Agency for Medicines and Health Products Safety (ANSM).

Theoreme, the company behind Andro-Switch, says the device, if worn at least 15 hours a day for a few months, lowers sperm production enough to cause temporary and reversible infertility.

The regulator said the device needed to prove its safety and efficacy in a clinical trial before it could be used by the general public.

It added, however, that the idea of a thermal male contraceptive “could bring a real benefit to public health when it comes to sharing the contraceptive burden between women and men”.

Nickels, of MCI, added that "a lot of people are understanding that instead of a fifth hormone-releasing IUD on the market, maybe we can have one male contraceptive".

Recent studies do suggest many men would consider hormonal birth control if it were available.

In the US alone, 77 per cent of sexually active men aged 18 to 44 surveyed in 2017 were "very or somewhat" interested in trying out a male form of birth control other than condoms or vasectomy.

Vahdat said she hopes this will ring even more true in the wake of the reversal of Roe v Wade and the rise of anti-abortion legislation across the US.

“I'm hoping that this is at least one positive outcome: That we'll have the social change and awareness about the need for everyone to be thinking about contraception, not just assuming it's the women's responsibility,” she said.

Gut health scientists need 100,000 volunteers to send them their poo