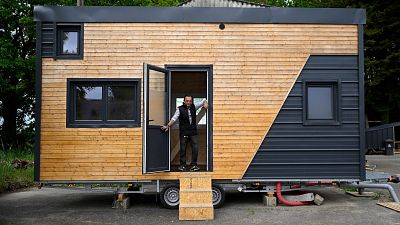 Pascal, 52, formely homeless, poses in the "tiny house" he built with other homeless people, in the premises of Amisep, a Breton association fighting against precariousness.   -   Copyright  DAMIEN MEYER / AFP
By Aisling Ní Chúláin  & AFP  •  Updated: 08/05/2022

"Freedom!" exclaims Pascal as he proudly shakes the keys of his brand new compact "tiny house" on wheels.

And what sweetens the moment is that he has helped build the mobile home himself.

Homeownership was perhaps not on the cards for the unemployed 52-year old, until he began working with AMISEP, a social outreach organisation that offers training to adults in Brittany, France.

"The specificity of the project developed by AMISEP is to build mobile homes with homeless people, and ensure that the future inhabitants of these mobile homes are involved in the whole construction phase," Simon Robitaille, who is heading up the project at the organisation, explained.

Moreover, Robitaille says the project can respond to a demand in the area for smaller-scale housing units.

"In the Gulf of Morbihan, we have a lot of difficulties finding small housing at contained rates for people who are on social minima, who work on temporary contracts, part-time, things like that," he said.

The project is designed to offer people in precarious positions such as asylum seekers, homeless people, or people in unemployment the opportunity to own homes and also gain practical experience in construction.

"I try to evaluate each person to see a few of their skills and where they feel most comfortable," Bastien Gohier, the technical director of the project, said.

"I try to divide the tasks according to each person's abilities," he added.

For the participants, it’s not only the lucky chance to own their own mobile home drawing them in, but also the social dimension of the project.

"It's important because I don't have much to do. I come here to keep myself busy and it does me good," said Malian asylum seeker and project participant, Mahono Coulibaly.

"It makes me happy to participate in the atmosphere here. I really enjoy it".