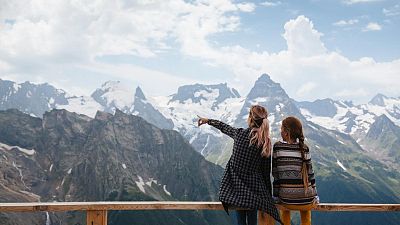 The Nordics are always winning the happiness race. Finland took the top spot for the fifth year in a row, followed by Denmark, Switzerland, and Iceland. But why are they so consistently happy?

But according to the World Happiness Report (WHR), those theories are not accurate.

Yes, Nordic countries are all relatively rich and happy, but not all relatively rich nations are happy like the Nordics. Singapore, one of the wealthiest in the world, sits at the 27th place, while Kuwait, the world’s fifth-richest, is all the way back in the 54th spot.

The one money factor we should look into is that Nordic countries are known for having low levels of income inequality, yet researchers have not proven that it actually correlates with high life satisfaction. However, what they have been able to prove is that if income inequality leads to mistrust, then it does directly contribute to lower life satisfaction. Simply put, people really do hate feeling cheated.

Must be genetics, then. Are they biologically predisposed to be happy?

Even if the answer to that question was a resounding yes, that would only paint about a third of the picture.

Science has been telling us for years that genetics play a role in explaining people’s satisfaction with their lives. It’s what the happiness experts call the ‘biomarkers’ of happiness.

However studies tell us that 60 to 70 per cent of the difference in happiness between people is caused by environmental factors, so only the remaining 30 to 40 per cent is attributable to genetics.

It’s not because they are 'small' and 'homogenous' nations

The WHR authors also say they have failed to show a relation between the size of a country’s population and life satisfaction.

And what’s more, Nordic countries are not exactly homogenous. Around 8 per cent of the Finnish population is foreign-born, about the same percentage as in Denmark, where 7.5 per cent is foreign. That’s not that different from countries such as France, where immigrants make up around 10 per cent of the population.

Where they [the Nordics] are really top on, is in trust and benevolence, both within their official institutions and their private behaviour.

And if you still argue that 10 per cent is significant, findings from the 2018 World Happiness Report showed the share of immigrants in a country has no effect on the average level of happiness of those locally born.

Of the happiest countries, 10 on the list had a common share of immigrants averaging 17.2 per cent, which is about twice as much as the global average.

And what is most important yet. Other analyses show that the effect of ethnic diversity on social trust becomes unimportant when there are quality government institutions. And this leads us to the binding element behind Nordic happiness: trust.

We asked the editor of the World Happiness Report, Professor John F. Helliwell, who has been working on happiness surveys for 25 years: how can nations be happy, Nordic style?

"The simple answer is to be high on all of the six variables," he jokes, referring to the six key indicators in the World Happiness Report - GDP per capita, social support, healthy life expectancy, freedom, generosity, and corruption.

"But where they [the Nordics] are really top on, is in trust and benevolence, both within their official institutions and their private behaviour".

What does that mean, in practice? This is what experts think it comes down to.

1. The quality of government institutions and welfare state generosity

These have an important and positive impact on life satisfaction (so much in fact, that the Corruption Perception Index can work as a predictor of who will make it to the top or the bottom of the happiness ranking).

Data shows people are more satisfied with their lives in countries where there is institutional quality. That’s usually divided into the democratic quality and delivery quality. The latter is the one more strongly related to citizen happiness, according to the WHR: good pensions, generous parental leaves, maintenance for the ill and disabled, free health and education, solid unemployment benefits, etc.

Quality government institutions are successful at making inequality levels very low, and that makes people happy because they feel they can trust their public institutions.

That’s according to Helliwell. One of the experiments they’ve developed to test and prove the importance of trust is by asking people if they thought their wallet would be returned if they lost it.

The researchers compared how likely a respondent thought their lost wallet would be returned with their score of life satisfaction. The results showed that those who expected their wallet to be returned had a life evaluation of more than one point higher on a scale of zero to 10.

In other words, people who trusted their wallets would be returned considered themselves to be happier than those who didn’t.

Reader's Digest, an American company, conducted a similar experiment globally in 2021. Can you guess which city had the most wallets returned? Helsinki.

The World Happiness Report uses the Gallup World Poll as the principal source of data and asks respondents to provide a broad “life evaluation” using the mental image of a ladder, with the best possible life for them as a 10 and the worst possible as a zero.

So, we’re back to money. Ahem, tax the rich?

Researchers have come up with a strong link between progressive taxation - a tax rate that increases as the taxable amount increases - and people’s assessment of how happy they are.

Progressive taxation leads to happiness via public and common goods such as health care, education, and public transportation that the taxation helps to fund. And ultimately, you guessed it, trust. People trust the money will be used and distributed wisely.

Again, in more equal societies, people trust each other more. And social trust contributes to the building of better institutions.

If you look at the prevalence of positive emotions in various countries throughout the World Happiness reports, Latin America usually occupies the top, yet these countries do not even make it to the top 20 in the overall ranking for happiness.

On the other hand, Nordic countries come out as the happiest, but that’s not where people report the most frequent positive emotions.

In fact, as my colleague Tim Gallagher reported, the way people from the Nordic nations perceive themselves is quite melancholic.

The weather doesn’t have much influence on your overall happiness

It is true that Nordic winters are long, dark and cold, and most of us associate warmer temperatures and bright sunny days with happiness. But findings from the report suggest the effect on the happiness score is quite insignificant.

People adapt to the weather, meaning heavy rain, snowstorms and sub-zero temperatures do not typically affect the life satisfaction of those who are used to living under those circumstances.

So what can we try at home?

The Nordic countries have managed to enter a very virtuous cycle, where efficient and democratic institutions are able to provide citizens security, so that citizens trust institutions and each other, which leads them to vote for politicians that promise and deliver a successful welfare model.

However, there are some things you can actually do.

"We find people are much, much happier if they feel they're in an environment where people are going to watch their back. And it's really important to tell people that because they fail to understand all over the world how generous other people are," says Helliwell.

He says that the trust we place in others is in fact higher than what we take it to be. Lacking this trust makes us unhappy. Or at least, not happy like the Nordics.

Helliwell also says one of the reasons people underestimate the benevolence of their neighbours is because they don’t hear about it in the media.

"Which makes a case for good news and shows they are really important because it's what determines what you think of your neighbours," he said.

So up your trust levels and read more good news.

What else can the Nordics show us about gaining trust and happiness?

Be a more involved citizen and push for institutions that serve the public interest. Fight to protect democratic bodies such as a free press, which help empower citizens and keep governments accountable.

Join cultural and local activities to build up your sense of community, trust, and social cohesion.

Look out for good things and what’s going well in the world.

Editor’s note: Camille presents the Good News bulletin on Euronews - make sure to check it out for a weekly dose of uplifting news.

Meta and TikTok fined by Russian courts over LGBT+ content