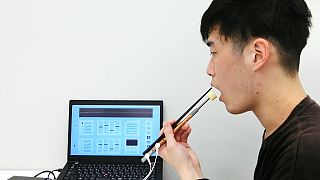 Users hook the chopsticks up to a wrist-mounted computer module that generates a weak electric current. The wavelength of the current attracts the sodium ions in food and draws them to the chopsticks, making food seem saltier even when it contains less sodium.

During tests on people following a low-sodium diet, the electric chopsticks boosted the perception of how salty food was, even when eating foods containing 30 per cent less salt than a typical portion, the researchers said.

"As a result, we are able to enhance the salty taste by up to 1.5 times," Meiji University professor Homei Miyashita, whose team developed the prototype device in collaboration with Japanese drinks manufacturer Kirin, told Reuters.

Earlier this year, Miyashita's lab made another foray into the world of food tech, trialling a lickable TV screen that can imitate the flavours of up to 20 different foods.

Typical Japanese cooking ingredients like miso and soy sauce mean diets in the Pacific island nation can be high in sodium. The average Japanese adult consumes 10 grammes of salt a day, double the limit recommended by the World Health Organization (WHO).

If we try to avoid salt in a conventional way, we would need to endure cutting out our favourite food from our diet, or endure eating bland food

"To prevent severe lifestyle-related diseases or to prevent these diseases itself, we need to reduce the amount of salt we take regularly," Kirin researcher Ai Sato said.

"If we try to avoid salt in a conventional way, we would need to endure cutting out our favourite food from our diet, or endure eating bland food," she added.

Higher sodium consumption can contribute to raised blood pressure and a higher risk of cardiovascular illness and stroke.

In 2013, WHO members adopted a voluntary resolution to cut salt consumption by 30 per cent. An estimated 2.5 million deaths could be prevented each year by lowering global salt intake to the recommended level, the organisation said last year.

In a statement, Miyashita and Kirin said they planned to commercialise the prototype chopsticks, with a view to bringing them to market next year.