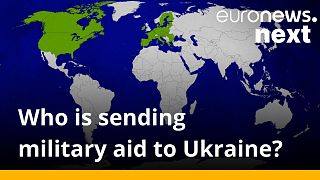 Countries around the world are sending military supplies and humanitarian aid to Ukraine amid the Russian invasion.   -   Copyright  Euronews
By Thomas Duthois  & AFP  •  Updated: 04/03/2022

While the war in Ukraine continues to rage, countries across the globe have offered their military support to the Ukrainian government to fight off Russia's invasion.

In a historic move for the bloc, European Commission president Ursula von der Leyen announced on Monday that the EU would finance the purchase and delivery of arms to Ukraine totalling €450 million.

"Today, I have proposed the third package of sanctions. And it's a whole package from financial sanctions,(...) but also for the very first time in the European Union, providing military equipment to Ukraine, a country under attack and conflict," she said in an exclusive interview with Euronews.

Some countries in the bloc would also be sending fighter jets, the EU's foreign chief Josep Borrell announced.

In another major shift, Germany has broken its long-standing foreign policy of banning all exports of lethal weapons to conflict zones and will deliver 1,000 anti-tank rocket launchers, 500 Stinger surface-to-air missiles, nine Howitzers, 14 armoured vehicles and 10,000 tonnes of fuel to Ukraine.

Also breaking with its neutral stance, Sweden announced that it would deliver anti-tank weapons to Kyiv.

France, for its part, has committed defence equipment and fuel support.

As well as protective equipment, the Netherlands will also provide 200 Stinger anti-aircraft missiles as soon as possible.

Portugal, the Czech Republic and Romania are also supporting the Ukrainian defence by providing military equipment.

Portugal has offered protective equipment such as bulletproof vests and helmets as well as night vision goggles, grenades and ammunition of various calibres.

In addition, Bucharest has announced that eleven Romanian military hospitals are prepared to receive Ukrainian wounded in the conflict.

Help is not only coming from the EU. North American countries are also offering their assistance to the embattled Ukrainian forces.

The US announced a new €350 million military aid package to Ukraine in what US Secretary of State Antony Blinken said was an "unprecedented move," bringing the total military aid from Washington to Ukraine over the past year to a total of nearly €1 billion.

The Ukrainians have in particular asked for Javelin anti-tank missiles, which will be included in the package US president Joe Biden said.

Finally, Canada announced the sending of military protective equipment, such as helmets and bulletproof vests but also anti-tank weapons systems and upgraded ammunition.

More countries around the world are offering their help to Ukraine every day. In the past week, an additional six countries have announced military aid packages for Kyiv.

On Monday, Finland, a country that is not yet aligned with NATO but is a member of the EU, announced a historic policy shift to send weapons to Ukraine, promising 2,500 assault rifles, 150,000 rounds of ammunition, 1,500 rocket launchers and 70,000 field rations.

Denmark too announced on Sunday that it would be sending 2,700 anti-tank weapons and would let Danish volunteers join International Brigades forming in Ukraine to defend the country.

Norway, which had already announced on Sunday shipments of helmets and bulletproof vests, said on Monday it would also be sending 2,000 M72 anti-tank weapons.

In the Balkans, Croatia is sending €16 million worth of protective gear and light arms while Slovenia has promised rifles, ammunition and helmets.

Italy has also announced that it will send military equipment but has not disclosed details yet of what this may entail.

As this is a developing story, not all new countries will be represented in the video in the media player above but will be included in the article which will be continually updated.