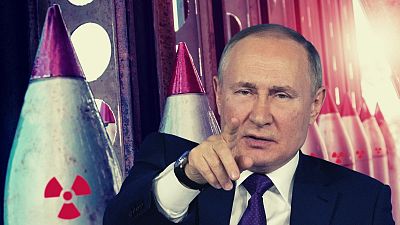 Over the past month, Russia has repeatedly waved the threat of nuclear force to deter the West from meddling in the war in Ukraine.

This week, the Kremlin’s spokesman refused to rule out the use of nuclear weapons, saying they could be used if the country faced an "existential threat".

The head of the Russian space agency also issued an ominous warning, saying "the Russian Federation is capable of physically destroying any aggressor or any aggressor group within minutes at any distance".

The comments - which follow President Vladimir Putin’s order last month to put Russia’s deterrence forces on special alert - have alarmed the West, and top US government officials say the White House is now mapping out how it could respond should Russia use weapons of mass destruction.

So, how close is Russia to unleashing its atomic arsenal? And how destructive could it be?

“If Putin felt his rule was threatened, if he didn't show some success in Ukraine or he didn't look strong, would he reach for a nuke?

Pavel Podvig, an expert on Russian nuclear forces and senior researcher at the United Nations Institute for Disarmament Research (UNIDIR), says there are very few scenarios in the battlefield where the immense power yielded by nuclear weapons might actually have a tactical purpose - for example, to destroy hardened underground structures or bunkers.

"They would produce a mushroom cloud, a fireball. They would set fire to everything in sight. They would release massive amounts of radiation

How far will Putin go?

"It's not like there are Iskander missile launchers driving around with their nuclear warheads installed, and there are no aircraft sitting on tarmac with nuclear bombs attached - no, we're not there," Podvig said.