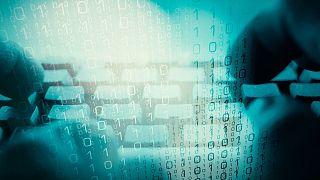 Ukraine has made crypto, social media and a cyber army the pillars of its resistance against Russia.   -   Copyright  Canva
By Natalie Huet  •  Updated: 19/03/2022

Quick fundraising in cryptocurrencies, an army of volunteer hackers, and a strong voice on social media have all helped Ukraine put up an unexpectedly strong front against Russia’s invasion over the past three weeks.

The digital war has become a key pillar of Ukraine’s resistance, and the experience the country is accumulating in the sector could be key to its post-war reconstruction, Alex Bornyakov, the Ukrainian Deputy Minister of Digital Transformation, told Euronews Next.

In particular, Ukraine is hoping to eventually become a leader in the use of cryptocurrencies, which proved a lifeline in the early days of the war, when donations in digital coins came pouring in from around the world.

"It exceeded all of our expectations," Bornyakov said in a video interview.

The state-run Crypto Fund of Ukraine - which accepts donations in digital currencies such as Bitcoin and Ethereum - has raised $55 million (around €50 million) so far. In terms of overall crypto donations to the country, this figure is more likely in the region of $100 million (€90 million), according to the latest estimates.

The Ukrainian government has already spent $34 million (€30 million) of that to buy bullet-proof vests, night vision goggles, helmets, medicine and food supplies for fighters on the front lines, Bornyakov said, speaking on Zoom via a Starlink internet terminal from an undisclosed location in Ukraine.

Using crypto instead of traditional financial institutions has made money transfers much faster and more nimble, he said, noting that in a war, time is crucial.

"You can imagine a bank transfer - if you send money and then you wait for two or three days," he said. "In crypto, you just send the money and in five 10 minutes, the transaction is done".

Even before the war, Ukraine ranked fourth in the world in terms of cryptocurrency adoption, according to the blockchain data platform Chainalysis.

And this week, President Volodymyr Zelenskyy enacted a new law allowing foreign and Ukrainian crypto exchanges to operate legally in the besieged country.

Bornyakov said the move ensured that the government’s crypto fund was operating in a fully legal way, but also aimed to send "a powerful message to the world: that once the war is over, we're going to welcome all companies from around the world to work in Ukraine".

The government is hoping that developing a legal market for virtual assets today will eventually help the country’s economy recover from the war.

Ukraine’s digital ministry has also set up a volunteer "IT army" of hackers on the messaging tool Telegram, where it lists "tasks" - such as names of Russian websites to target with cyberattacks - that anonymous internet users from all around the world can take on.

That cyber army is now over 300,000-strong, Bornyakov said - even though the Ukrainian government knows close to nothing about its members.

"We don't pay anyone. We don't talk personally to anyone because there is a matter of security and we don't want to compromise anyone, because there is a risk of infiltration in this case. So, they just see the task and they execute it," he said.

On Thursday, the Russian government said its websites were facing unprecedented cyberattacks and that it was stepping up efforts to filter foreign web traffic.

Asked if this was the work of Ukraine’s IT Army, Bornyajov replied: "I think yes. We don't really know. I mean, because of the design of the system, how it's built, we don't really know who has executed this, but we know it's down".

However, he said the results of Ukraine’s cyberattacks suggest that the power of Russia’s own cyber army has been overinflated - "like their regular army".

Ukraine's digital ministry has made headlines since the start of the war for its outspoken chief Mykhailo Fedorov, 31, the youngest member of Zelenskyy’s cabinet.

These Starlink terminals now allow tech workers displaced by the war to continue working hand in hand with the government "even in small villages and areas where there are bombings and shelling," Bornyakov said.

Fedorov also took to Twitter to publicly pressure the CEOs of multinationals including Apple, Google, Intel and PayPal to stop doing business in Russia.

This "digital diplomacy" - as Bornyakov calls it - has paid off, with more than 400 companies cutting ties with Moscow so far, including scores of tech firms.

Bornyajov said he was actually surprised that so many companies had left Russia without being forced to by governments. He would now want to see software companies stopping all existing contracts with Russia - and Apple Store and Google Play leaving the country as well.

Through all its efforts, Ukraine’s digital ministry has built a robust network of contacts across the tech industry that will prove crucial during the war, but also beyond, he added.

"Of course, it bothers me that a lot of people, talented people, already left the country. But as far as I know, most of the people are willing to get back once it's over," he said.

"But of course, it depends on the length of the war".