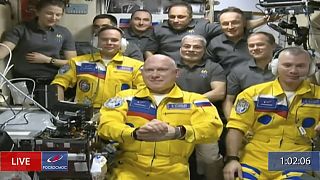 Three Russian cosmonauts on a mission to the International Space Station (ISS) emerged from their Soyuz capsule on Friday wearing the colours of the Ukraine flag.

The manned mission to the ISS is the first since Russia's invasion of Ukraine on February 24.

The Soyuz spacecraft carrying Commander Oleg Artemyev and fellow cosmonauts flight engineers Sergey Korsakov and Denis Matveev - the first all-Russian crew in 22 years - docked with the ISS three hours after blasting off from the Russian-leased Baikonur cosmodrome in Kazakhstan on Friday evening.

Instead of their usual blue flight suits, the trio boarded the ISS wearing yellow suits with blue stripes.

In a video released by the Russian space agency Roscosmos, the cosmonauts can be seen in their atypical yellow suits in a traditional welcome ceremony onboard the space station, marking the start of their six-month mission in space.

The mission comes amid heightened tensions between Russia and the US over President Vladimir Putin's decision to launch a "special operation" in Ukraine.

While many other planned launches have been delayed by the war, the arrival of the three cosmonauts to the ISS is a continuation of a two-decades-long co-operation between the two countries in space.

The ISS has traditionally been manned by an international crew mostly from the US, Russia, and Europe. Its current crew consists of four NASA astronauts, two Russian cosmonauts, and an astronaut from Europe.

Artemyev, Matveev and Korskakov will be replacing Russians Pyotr Dubrov and Anton Shkaplerov, and American Mark Vande Hei, who are scheduled to return to Earth on March 30.

There were initially concerns that Russia would refuse to let Vande Hei return to Earth on its Soyuz capsule, leaving him stranded in space in retaliation for sanctions imposed on Russia by the US.

The head of Roscosmos, Dmitry Rogozin, also raised eyebrows in the days after the initial invasion when he suggested the ISS could crash from the Earth's lower orbit into the US or Europe because of western sanctions on Russia.

"If you block cooperation with us, who will save the International Space Station (ISS) from an uncontrolled deorbit and fall into the United States or Europe?" Rogozin tweeted.

In response, NASA said in a statement that it "continues working with Roscosmos and our other international partners in Canada, Europe, and Japan to maintain safe and continuous ISS operations".

It added that "no changes are planned to the agency's support for ongoing in orbit and ground station operations. The new export control measures will continue to allow US-Russia civil space cooperation".