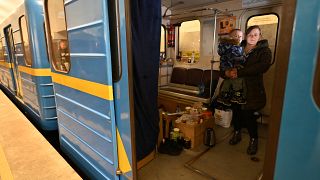 Life for Kyiv's roughly 3 million inhabitants has changed beyond recognition since the Russian invasion of Ukraine began on February 24.

Kyiv's metro stations have become bomb shelters, ordinary citizens have become volunteers on the frontline of the war. In their pockets, the app that once sold them tickets for public transport now broadcasts air raid warnings dozens of times a day.

The app, Kyiv Digital, was transformed "overnight" by its developers into a wartime survival tool, a spokesperson for the app's team told Euronews Next.

"The app now reports air raid alerts, tells you where to find the nearest bomb shelter, a working pharmacy, a petrol station or to help the Ukrainian military," she said.

As the war reaches its third week, the Kyiv Digital app has also come to serve an even grimmer purpose: residents of the Ukrainian capital can use it to upload evidence of suspected war crimes by the Russian military and find blood donation centres to help those injured in the fighting.

The app, which has been downloaded by an estimated 1.5 million people, is playing a key role in the war effort, Kyiv’s deputy mayor and chief digital transformation officer Petro Olenych said in Telegram messages sent to Euronews Next

"Everyone's job is extremely important nowadays. The assemblyman wiring the Internet to the shelter. The courier who delivers food. Volunteers who deliver medical supplies all day long. The military who protects us. Everyone is in their place and doing their best," he said.

"Our main job now is to keep the people of Kyiv informed, to adapt the services for the comfort and safety of citizens, and to maintain communication and work of urban infrastructure. We contribute to win".

Our team is working 24/7. War has no weekends

So far, the feedback from users has been "memorable and moving," particularly the thanks received when Kyiv Digital launched its air raid warnings, the spokesperson said.

That feedback also serves another purpose, informing changes and updates to the digital service.

Since its transformation began, Kyiv Digital has added maps of food shops that are still open, working veterinary clinics and pharmacies in response to requests from the capital's residents.

Keeping the app up-to-date is a daunting task. "Our team is working 24/7. War has no weekends," the spokesperson told Euronews Next.

Ukraine's adaptation of everyday technology has been a defining feature of the war so far.

According to Olenych, the technology has provided backup communication channels for Ukraine's military administration and Kyiv's mayor, Vitaliy Klitschko.

Kyiv has also stepped up the availability of public WiFi across the city, bringing coverage to more than 200 air raid shelters in an effort to aid the flow of information and allow its residents to keep in touch with relatives.

The man in charge of the city's digital transformation believes that once the war is over, Kyiv Digital's former functionality as an app for public transport and parking will return. But digital services will also play a role in rebuilding the capital.

"We will contribute to the restoration of the destroyed facilities and strengthen the information support of the working enterprises - it is important for the city and Ukraine to support and restore the economy," Olenych said.

"Before the war, we had many plans and options that we wanted to add to Kyiv Digital. Eco-monitoring services, petitions, etc. I think we will also return to them, but with a new adaptation".