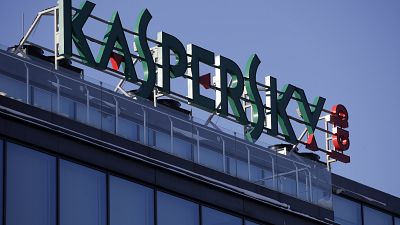 Germany'si information security office has warned that Kaspersky antivirus software could be "misused" in cyberattacks - but the company denies this claim   -   Copyright  Pavel Golovkin/Associated Press   -
By Tom Bateman  •  Updated: 15/03/2022

Germany's Federal Office for Information Security (BSI) has recommended users of Kaspersky antivirus software switch to an alternative over fears the Russian cybersecurity firm could be used to facilitate cyberattacks by the Russian government.

In a bulletin published on Tuesday, the BSI warned that the war in Ukraine had raised the risk of attacks on IT infrastructure in NATO countries and the European Union.

"A Russian IT manufacturer can carry out offensive operations itself, be forced to attack target systems against its will, or itself be spied on as a victim of a cyber operation without its knowledge or be misused as a tool for attacks against its own customers," a translation of the BSI's original German announcement said.

Kaspersky Lab responded to the claims by denying the existence of any link between it and the Kremlin.

"We believe this decision is not based on a technical assessment of Kaspersky products – that we continuously advocated for with the BSI and across Europe – but instead is being made on political grounds," a statement provided to Euronews Next by the company's European communications head Stefan Rojacher said.

"Kaspersky is a private global cybersecurity company and, as a private company, does not have any ties to the Russian or any other government," the statement added.

The company's statement also highlighted how its data processing infrastructure has been based in Switzerland since 2018, and that information from German users is processed in two data centres located in Zurich.

This is not the first time Kaspersky's Russian origins have brought the cybersecurity company under scrutiny.

In 2017, Department of Homeland Security officials in the United States ordered government departments and federal agencies to "remove and discontinue present and future use" of Kaspersky products, saying that "the risks presented by Kaspersky-branded products" justified the move.

A Bloomberg Businessweek report on the US government's decision claimed that Kaspersky had links to Russia's FSB intelligence agency, and alleged the company had "developed security technology at the spy agency’s behest and worked on joint projects the CEO knew would be embarrassing if made public".

Company founder Eugene Kaspersky denied allegations of Kremlin influence during a Reddit AMA session in May 2017.

When asked if the Russian government influenced Kaspersky's operations, he replied: "No, it doesn’t and any speculation about it are false, they are unfounded conspiracy theories".