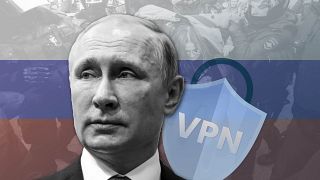 Almost two weeks into Russia’s invasion of Ukraine, Russian authorities have already banned over 200 websites, 300 foreign companies have pulled out of the country and fears are growing that the government may move towards disconnecting Russia from the global internet.

The Kremlin has cracked down on independent media by bringing in a new law making dissemination of "false information" punishable by up to 15 years in prison.

Simply referring to the Russian invasion as a "war" instead of a "special military operation" is enough to fall afoul of these new rules.

To circumvent the censorship bearing down on the country, Russians are increasingly turning to VPNs - or virtual private networks - to keep channels open to information from outside Russia.

What is a VPN?

VPNs are a kind of software that creates an encrypted tunnel between the user and a remote server, changing the user’s unique IP address in the process and concealing where in the world their IP address is originating from.

"The Russian government will be desperately trying to block VPNs. It is possible to identify VPN traffic at the network level and block it. And what that means is that your VPN will stop working.

"If a website is trying to block Russian traffic, you no longer appear to be Russian. It looks like you're coming from London or from Paris or anywhere in the world," Simon Migliano, head of research at Top10VPN, told Euronews Next.

VPN apps rose to the top of the App Store and Google Play in Russia last week as the government blocked social media sites.

According to data from Top10VPN, search traffic originating from Russia related to VPNs rose 633 per cent week-on-week.

Is using a VPN safe?

At the time of writing, it is still possible to access banned social networking sites via VPNs in Russia but Migliano cautions that even while using VPNs, there are ways that states can still try and block websites.

"The Russian government will be desperately trying to block VPNs. It is possible to identify VPN traffic at the network level and block it. And what that means is that your VPN will stop working," said Migliano.

What happens in this instance, Migliano says, is that the biggest, paid VPN providers with lots of budget end up constantly hiding the traffic and performing what is known as "obfuscation".

"This is what works in China. This is why there are VPNs that still work in China, despite China being the most advanced nation on Earth when it comes to censorship," he explained.

"Russia is a long way behind China. But as you know, they are ever more closely allied with China, and I'm sure they'll be sharing information."

According to Migliano, while a VPN itself is completely secure, it is possible for a VPN provider to be compromised or for a government to pose as a VPN provider.

“They can then access all of your traffic,” he added.

Which VPN to use

Migliano’s advises people to be judicious when selecting a VPN and recommends paying for one where possible because “you do get what you pay for”.

Some of the VPNs Migliano recommends for Russians to download are Proton VPN, Astrill and PrivateVPN.

[Note: Proton, Astrill and PrivateVPN are not main partners of Top10VPN but the website receives customer referral fees if users sign up to a paid subscription plan and have clicked through from their site]

Beyond that there are a few trustworthy free VPNs, but research is recommended.

“Make sure you choose a provider that is well known, that has plenty of information about them already online and isn't a no-name provider, [one] that might be top of the VPN download chart at any given time,” he said.