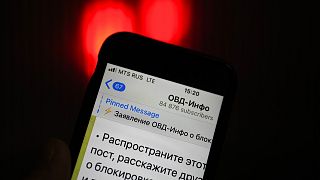 Telegram is a hybrid platform that has private one-on-one and group chats that can have as many as 200,000 members.   -   Copyright  Alexander Zemlianichenko/Associated Press
By Pascale Davies  •  Updated: 08/03/2022

The messaging tool Telegram has become one of the apps at the heart of the war in Ukraine.

Just days after Russia invaded, Ukrainian president Volodymyr Zelenskyy sent a message to his Telegram followers from the capital Kyiv where he called on his countrymen to resist the Russian attack.

Meanwhile, many people in Russia are using the app to access the news and conversations about Ukraine that are not the state-sanctioned version of events.

But how can you use the app and is it safe?

What is the app used for?

The primary use of the app is to message your contacts; you can also create separate groups.

It is a hybrid platform that has private one-on-one and group chats that can have as many as 200,000 members.

But you can also sign up to follow individuals, such as Zelenskyy, as well as companies and communities, such as cryptocurrency groups.

You can also follow news websites and subscribe to newsletters to get information outside state-controlled media, making it a lifeline for people in Ukraine and Russia.

Russian lawmakers last week passed amendments to the criminal code, making the spread of “fake” information an offence punishable by up to 15 years jail time and said anyone who called for sanctions against Russia would be fined.

In response, global media groups such as the BBC and Bloomberg have said they were temporarily halting their reporting in Russia.

Telegram has a reputation of being a secure messaging app but you still need to be careful.

You can also opt into "Secret Chats," which are not stored on Telegram’s servers. You can also set a self-destruct timer on messages; they will be automatically deleted, and if one person deletes a message it disappears on both devices.

To set this up on Android, you slide out the left menu and select New Secret Chat and on iPhone you open a chat, type in the contact’s name and select More, then Start Secret Chat.

Other platforms that do use end-to-end encryption are WhatsApp and Signal, whose founder has called out Telegram for being less secure.

There are fears that Russia’s government may tell Telegram to hand over user information.

This already happened in 2018 but Telegram stood up to Russia’s government, who took the company to court and banned the app for two years. Users, however, still had access to the app. Russia dismissed the case in 2020.

Countries can also ban certain channels and customise access to them.

For example, in Europe, you cannot access Russian media channels Sputnik and Russia Today (RT) on Telegram following the European Union’s decision to ban them for disinformation around the war in Ukraine.

As for spreading misinformation, it is unclear how many users are real and how many are bots. Several fake users have already been reported on Telegram that have amplified the Russian government’s line or liked posts.

However, preventing misinformation and disinformation is not just an issue for Telegram. WhatsApp has put in place dedicated campaigns to counter-propaganda.

Will Cathcart, the head of WhatsApp, said on Twitter that Ukraine Emergency Services had launched a helpline to provide people with quality information about the situation.

Using Telegram if your country blocks it

One useful feature of Telegram is that if it is blocked in your country, you can connect via a proxy server or use a VPN on your phone.

To set up a proxy server you open Settings > Data and Storage > Proxy Settings > Enable Use Proxy and then you can fill out the information.

Not just for news

Telegram is not just useful for news though. Through the app, you can also watch films, read books and listen to music that may be also banned in your country.