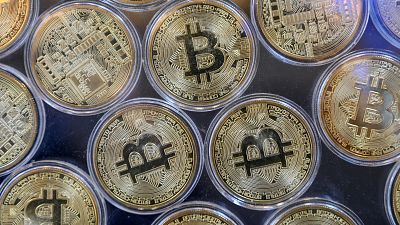 Donations in cash and cryptocurrency have spiked following the Russian invasion of Ukraine, according to one blockchain analyst   -   Copyright  Ozan KOSE / AFP
By Tom Bateman  •  Updated: 25/02/2022

Ukrainian charities and volunteer groups have raised over $4 million (€3.5 million) in cryptocurrency donations since the beginning of the ongoing invasion by Russian troops, according to the blockchain analysis firm Elliptic.

The total includes one single donation worth $3 million (€2.6 million), received on February 25, the company said on Friday.

The groups taking crypto donations include Come Back Alive, a Ukrainian NGO that began crowdfunding to buy bulletproof vests for the Ukrainian military after the Russian annexation of Crimea in 2014.

According to its website, the charity currently uses donations to pay for equipment and training for the country's armed forces.

The Kyiv Independent, an independent news organisation reporting in English has also raised over €12,000 in cryptocurrency, Elliptic said.

Also on Friday, Ukraine's interior ministry said a government bank account set up to raise funds for the country's military had received around €900,000 in donations in a single day.

Ukrainian NGOs have seen a surge in donations since Russian president Vladimir Putin announced an attack on Ukraine on February 24. The country's government has also asked for cash donations to support its defence forces, directing givers to a special account set up by the Ukrainian national bank.

"We are grateful to everyone who finds a way to support the Ukrainian army. We appreciate your support, it is very important at this time," head of the National Bank of Ukraine Kyrylo Shevchenko said in a statement released by the country's interior ministry on Friday.

But not all efforts to raise money have been successful.

On Friday, US-based crowdfunding site Patreon took down an appeal for support for Ukrainian military forces from Come back Alive, saying it broke the site's policies.

"This morning, Patreon suspended an organisation’s page from our site called ‘Come Back Alive’ because it violated our policies. The website of the organisation says they use contributions to finance and train military personnel," Patreon said in a statement.

The crowdfunding site said that Come Back Alive's plans to spend the money it raised on "1,500 tablets with software for Gunnya-Armour artillerymen, 230 quadcopters, 45 mobile surveillance systems," as well as training for "350 snipers, more than 2,000 sappers and more than 3,000 gunners" was a violation of its terms.

"We don’t allow Patreon to be used for funding weapons or military activity," it said, adding that all donations received so far would be returned.

In its statement, the company directed future donations to the charities the Ukrainian Red Cross Society, Voices of Children, and Revived Soldiers Ukraine.

Euronews Next has contacted Come Back Alive for comment, but had not received a response by the time of publication.

What does the future hold for Solana (SOL), the 'Ethereum killer'?