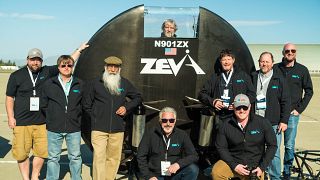 On a frosty January morning in a field south of Seattle in the US, a 3-metre black disc takes to the air.

It’s the first flight of a full-scale Zeva Aero Zero, a flying craft that its inventors believe will soon change the personal transportation landscape.

Powered by electric motors, not unlike those used in drones, it was airborne for just a short time before making a pitch-perfect landing.

“It’s an octocopter; it has eight motors, four on the top plane, four on the bottom plane. Each one is optimised for its position,” said Stephen Tibbitts, CEO of Zeva Aero.

A finalist for the Boeing-sponsored GoFly prize that offers a $1 million prize (€909,000), Zeva Aero's Zero is an electric Vertical Takeoff and Landing, or eVTOL, craft.

Its inventor’s vision foresees a flight craft capable of taking off vertically from a "skyport" on the side of a building, or from the ground, before transitioning to a forward flight mode.

"The pilot gets in standing up, and his head goes up there and he’s got a very nice view out the front. It takes off vertically and then flies forward at 160 miles per hour, basically in Superman mode," Tibbitts continued.

Designed to accommodate a single person in its prototype model, the pilot stands in the cockpit ahead of takeoff, looking through a plexiglass window.

Having shown the aircraft can take off, the next phase of testing will see the Zeva Zero attempt to transition to forward flight on a full test flight range.

Tibbitts says that the timing for such an aircraft is right.

"All of these technologies, the lightweight materials, the battery capacity, the efficient motors, are all coming together at the same time. The control systems, the semiconductors required to make all the parts, it’s all just converging," he said.

Like many change-shaping ideas, the Zeva Zero had small beginnings, with its flight capability demonstrated by a 1/8th scale model that tested its ability to make the vertical to forward flight transition.

The challenge is to leave the model on the shelf and get the full-scale Zero to do the same. If they’re successful, Tibbits sees a wide variety of uses for the aircraft.

"The customers that we view right now are first responders, medics that need to get on to the scene of an accident, to treat trauma victims as soon as possible," he explained.

"Of course, the DoD [the US Department of Defense] has expressed interest in re-supply, ship-to-shore, hot extraction kinds of applications".

Tibbitts' vehicle has also drawn the attention of wealthy customers who want to fly from their lake house to the city or hop between yachts.

The task of steering the project to a wider market falls to Gurbir Singh, the company’s Chief Technology Officer. The sky, in his eyes, is the limit, with companies such as Tesla proving that battery technology is ready to power the transportation sector.

"We are riding that same curve but we are recognising that that same battery technology is going to allow us to power aircraft that make this kind of a craft very viable as we go into the future," Singh said.

For now, it’s one step at a time, as engineers prepare the Zero for more tethered weight tests.

Human-piloted tests are some way off, with strict Federal Aviation Administration (FAA) standards to be observed along the way, but Tibbitts has no doubt about the Zero’s future.

"We will make this aircraft commercially available probably within two years but it will be unrestricted, it will be an experimental class and you’ll have to have a pilot’s license," he said.

"In about 2026 we hope that we have autonomy built in so that there’ll be the opportunity for anyone to fly it because it will be computer-controlled".