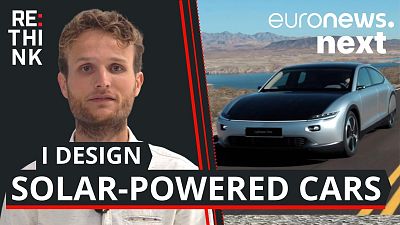 Cars that run on solar energy captured from lightweight panels built into the vehicle’s roof means consumers can refuel their cars automatically - either when stationary or on the road.

This makes solar-powered vehicles less dependent on third-party infrastructure such as charging stations, which is a necessity for standard electric vehicles.

Deriving energy from the sun will make mobility cheap, highly efficient, and independent from the grid for longer periods of time, says van Ham, which is particularly important in countries where charging infrastructure is inaccessible or costly.

Lightyear says this is a key differentiator when compared with other EVs on the market today.

"I think it’s critical for the energy transition that we're not limited by what big companies are able to install along the roads, but that it's really also a revolution from the people," van Ham told Euronews Next.

But it’s not just the energy source that’s making a difference - it’s also the design.

Lightyear One - the carmaker’s first model scheduled to begin production in summer 2022 - consumes 83 wh/kh, which is two to three times less energy than any other EV on the road today.

This means the car can travel up to 725 kilometres on one battery charge. By comparison, an average comparable EV can go between 400-500 kilometres without needing to recharge.

The reason why Lightyear One has been capable of reaching these milestones is rooted in the design principle of "maximum efficiency".

The rearview mirrors, for example, have been replaced with cameras to decrease the drag, the engine sits within the four wheels to distribute weight and optimise aerodynamics, and the panelled roof has been designed to capture heat, even if part of the car is in shade.

The efficiency principle has meant the car can drive longer distances on less energy, making the solar car a viable option and EV contender.

Prediction for the future

In the future, van Ham says the democratisation of mobility and manufacturing will see consumers using different vehicles for different occasions - such as shopping or for holidays - because mobility will be much more accessible and affordable.