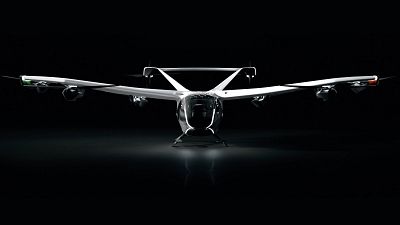 Hailing a flying taxi has come one step closer after Airbus unveiled its new all-electric next-generation CityAirBus in Toulouse on Wednesday.

The aerospace company hopes to have the futuristic looking model zipping around our skies by 2025 with test flights set to commence in 2023.

The model has a range of 80 km travelling at 120 km/h and is intended to facilitate inter-city travel.

The flying taxi service will be a niche market initially, according to Director of Urban air mobility at Airbus, Markus May, but he insists the goal is to make the service available to everyone eventually.

The zero-emissions aircraft is capable of running autonomously but the taxis will be piloted in the initial stages.

"When autonomy is ready, when the social acceptance and the safety standards are at a level which is good, then we will have an autonomous vehicle which can carry four passengers," Balkiz Sarihan, the Head of Strategy for Urban Air Mobility (UAM) at Airbus, said.

"But as a start, it will be three passengers plus one pilot".