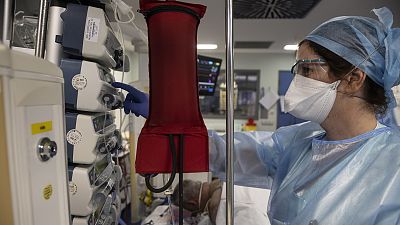 A nurse tends to a COVID patient in the intensive care unit at the Strasbourg University Hospital, eastern France, Thursday Jan. 13, 2022.   -   Copyright  Jean-Francois Badias/Associated Press
By Euronews and Reuters  •  Updated: 26/01/2022

The Omicron variant appears to result in less severe COVID-19 than seen during previous periods of high coronavirus transmission including the Delta wave, with shorter hospital stays, less need for intensive care, and fewer deaths, according to a new study.

However, the fast-spreading Omicron variant has led to record numbers of infections and hospitalisations.

Despite the steep spike in COVID-19 cases in the United States, the percentage of hospitalised patients admitted to intensive care units (ICU) during the current Omicron wave was about 29 per cent lower than during last winter's surge and some 26 per cent lower than during the Delta wave, the study published on Tuesday in the US Centers for Disease Control and Prevention's (CDC) Morbidity and Mortality Weekly Report found.

The lower COVID-19 disease severity during the Omicron period is likely related to higher vaccination coverage, booster use among those eligible for the extra shots, as well as prior infections providing some immune protection, the study said.

Deaths in the US during the period from December 19 to January 15, when Omicron infections were at a peak, averaged 9 per 1,000 COVID-19 cases, compared to 16 per 1,000 in the previous winter peak and 13 during the Delta wave, the study showed.

The findings were consistent with previous data analyses from South Africa, England, and Scotland, where infections from Omicron peaked earlier than in the United States, the CDC said.

Relatively high hospitalisations among children during the Omicron period may be related to lower vaccination rates compared with adults, the agency said.

Children under age 5 are not yet eligible for vaccines in the US and the rate of vaccination among older children lags that of adults.

The study involved analysis of data from a large healthcare database and three surveillance systems to assess US COVID-19 characteristics from December 1, 2020, to January 15, 2022.

The authors said one limitation of the study was that it was unable to exclude incidental infections in which patients admitted for other reasons test positive for COVID-19 while in the hospital. That may inflate hospitalisation-to-case ratios and affect severity indicators.

Mysterious hepatitis cases rise to 348 worldwide. Is COVID a factor?