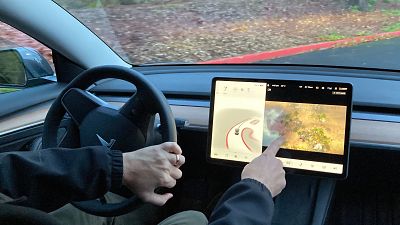 Seatbelt fastened? Check. Ignition turned on? Double-Check. But which game have you decided to play: Solitaire, Skyforce or Polytopia?

On the 2021 Tesla Model 3, it is now possible for drivers and passengers to play video games on the touchscreen dashboard while the vehicle is moving.

Vince Patton, a Tesla owner from Portland, US, discovered the feature via a YouTube video.

Curious to see for himself, he drove to an empty carpark and activated the game ‘Sky Force Reloaded’, a game he could pick from among a list of 19 apps on his dashboard.

“I was dumbfounded by that,” he told the AP. “That just seems so inherently dangerous”.

Patton, a 59-year-old retired broadcast journalist, demonstrated that by showing a little bit of bad faith, it is very easy for drivers to bypass the security put in place by Tesla.

“This is the warning you get when you put the car in drive: 'Use of Tesla Arcade while the vehicle is in motion is only for passengers. Please check local laws prior to playing',” he explained to the AP.

“So, you must say I'm a passenger, and I am only lying because I'm in a closed parking lot. I would never do this on the street”.

For Patton, who loves his car and says he has nothing against Tesla, the worries that drivers will play games and become dangerously distracted is a real concern.

That’s why he decided to file a complaint with the National Highway Traffic Safety Administration (NHTSA), the US government's road safety agency.

“NHTSA needs to prohibit all live video in the front seat and all live interactive web browsing while the car is in motion,” Patton wrote in his complaint. “Creating a dangerous distraction for the driver is recklessly negligent”.

According to the AP, NHTSA confirmed that it's looking into the matter.

Gaming while driving: Tesla allows it, Mercedes does recall

A few days after reports surfaced that Tesla allows drivers to play video games on dashboard touch screens while vehicles are moving, Mercedes-Benz has issued a US recall for a similar issue.

The German automaker said in documents posted on Friday by US regulators that the issue affected 227 vehicles and already has been fixed by updating an internal computer server, according to the AP.

Mercedes said in documents that on some 2021 and 2022 EQS and S model vehicles, drivers could access television programs and the internet while the vehicles are moving.

The automaker said it intended to disable the features while the cars are travelling, but the recalled vehicles had an incorrect computer configuration.

“If an occupant were to actively select the function or application while the vehicle is driving, then driver distraction might result, which could increase the risk of a crash,” the company wrote in the documents.

The recalled cars had active and connected “Mercedes me” accounts. Mercedes wrote that it has no reports of any crashes or injuries from the problem, which was discovered in a company vehicle in Germany.

Jason Levine, executive director of the nonprofit Center for Auto Safety, told AP the auto industry seemed to have reached a point with infotainment screens where it will have to “choose whether to be an enabler or a preventer" of distracted driving.

"We are glad to see Mercedes recall and repair this unreasonable risk to everyone on the road, but would urge NHTSA to move quickly to ensure that all screen-based entertainment distractions are disabled when vehicles are in motion, no matter the manufacturer,” Levine said.

If the idea of playing games while waiting for your car to recharge is attractive, the dangers linked to distraction are underestimated.

The NHTSA noted that crashes involving distracted drivers killed more than 3,100 people in 2019, representing about 9 per cent of all US traffic deaths.

But safety experts contend that distracted driving crashes are undercounted.

According to the Kiefer Foundation, a foundation dedicated to combating distracted driving, 10 people die every day in the US due to this scourge.

According to the New York Times, “distracted driving stems from activities that take drivers’ hands from the steering wheel, draw their eyes away from the road or divert their attention from the driving task”.

This could imply checking your smartphone for a text message, or just a notification.

In France, the number of people killed in a car crash due to the “causal factors of inattention or use of telephone or technological distractors” in 2020 was up to 312 people, or one in five people, according to the Observatoire national interministériel de la sécurité routière (ONISR), or French Interministerial Road Safety Observatory.