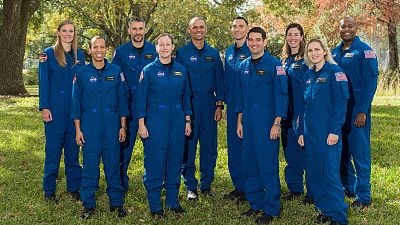 NASA has presented its new intake of astronauts, some of whom may one day walk on the surface of the Moon or even Mars.

There are plans to send humans back to walk on the Moon in a mission that could be just four years away, as well as the longer-term goal of sending astronauts to Mars.

Half of the new intake of astronauts are military pilots, while among them is a doctor, a robot expert, a surgeon, a bioengineer, and - in exciting news for fans of the movie Armageddon - a drilling specialist.

The astronauts were presented at NASA’s base in Houston on Sunday, home to Mission Control and the astronaut corps.

"Alone, each candidate has ‘the right stuff,’ but together they represent the creed of our country: E pluribus unum – out of many, one".

What is ‘the right stuff’?

Space missions take years of planning, hundreds or even thousands of support workers to make them happen, and huge investments of money in technology.

With all that preparation, those who actually get to make the journey into space must be chosen very carefully.

NASA, like the European Space Agency (ESA), has a strict list of requirements from prospective astronauts, as well as a hiring process that would put off all but the most committed job seekers.

To get onto NASA’s astronaut programme, aside from being a US citizen, you need the following:

While the above may seem onerous, the selection process for the new intake had to weed out some 12,000 applications.

NASA has accepted 360 people into its astronaut corps since the original Mercury Seven in 1959. The previous astronaut selection was in 2017.

Who are the new astronauts?

NASA plans to put the first woman on the Moon as part of its upcoming Artemis programme.

Four of the new intake are women, so there’s a good chance one of them could be walking on the lunar surface within a few years.

Christina Birch, 35, has already made a name for herself as a professional racing cyclist. But she’s swapping bikes for spaceships, with degrees in maths and molecular biophysics, as well as a doctorate in biological engineering under her belt.

Nichole Ayers, 32, is a major in the US Air Force, with a master’s degree in computational and applied mathematics. She has more than 200 combat hours and more than 1,150 hours of total flight time in fighter jets. In 2019 she led the first ever all-woman formation of the F-22 aircraft in combat.

Deniz Burnham, 36, is a lieutenant in the US Navy. She has experience in the energy industry, managing onsite drilling projects throughout North America.

Jessica Wittner, 38, is a lieutenant commander in the US Navy. She has a master’s in aerospace engineering, and has served as a fighter pilot.