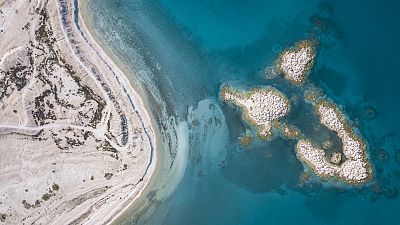 The picturesque Lake Salda in Turkey has long attracted visitors to its shores, enticed by its pristine waters and white sands.

But last year, it caught the attention of NASA researchers because of its similarities to the Jezero crater on Mars.

Experts say that rock deposits and minerals found in the lake are the closest matches to those found on the Red Planet, which will help scientists identify traces of ancient life.

"What makes it special are the living bacteria, the single-cell organisms, which have their own natural structure," Servet Cevni, a geological engineer, explained.

"The Jezero crater has a strong resemblance to the lake, in the same way humanity at the end of the day came from single-cell organisms, from a simple structure.

"In Salda this process is still ongoing. In fact, Salda has remained unchanged for 3.5 million years".

Lake Salda gained international renown when US scientists began investigating in preparation for the Perseverance rover mission, which has been beaming back videos from the Red Planet since February.

The Jet Propulsion Laboratory even posted a picture of the azure-coloured lake on its site before the rover's touchdown, saying it might resemble what an "aqueous" Mars looked like billions of years ago.

Watch the video in the media player above for the full story.