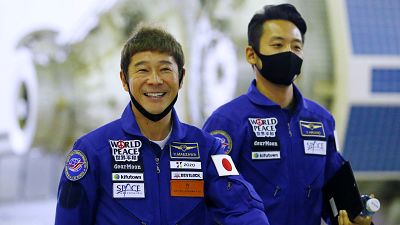 In July this year, British billionaire Richard Branson flew into space on a flight that was then investigated by an aviation watchdog for safety issues.

And on Wednesday 8 December, Japanese Yusaku Maezawa is scheduled to become the latest billionaire to pay a visit to space.

The first two were flying on their own company’s space flights, as they vie to establish their own space tourism enterprises, looking to sell seats to fellow wealthy tourists, scientists, and others wanting a few minutes of weightlessness.

Maezawa, along with his assistant, will be spending much more time in space than his rival billionaires, with a three-day stay on the International Space Station.

And it will be a Russian Soyuz spacecraft that takes them up into orbit, as Russia’s space agency Roscosmos looks to enter the potentially lucrative market of space tourism.

Who is Yusaku Maezawa?

Once a drummer in a rock band called Switch Style, Maezawa made his fortune in online fashion, establishing Japan's largest online clothing and accessories retailer, Zozotown.

According to Forbes, he is Japan’s 30th richest person, with a personal fortune of around €1.7 billion.

The 46-year-old isn’t planning to stop there when it comes to his own trips to space.

He has also paid for a flight around the Moon with Elon Musk’s SpaceX, a journey that will happen in 2023 at the earliest.

Like other billionaires in the limelight, he is something of an eccentric.

He is active on social media, with some 10 million following his Twitter handle @yousuck2020. It’s a medium he uses to run competitions among his followers.

In one competition held in 2020, he offered around €8,000 to 1,000 followers as part of a social experiment. The Tweet is the world’s most retweeted in history.

Then, after announcing his private flight around the Moon, he organised a competition among "single women aged 20 and over" to find a girlfriend to accompany him on this adventure.

After attracting nearly 30,000 candidates, he then said he wanted to invite six artists instead. Now, he has opted for a broader recruitment policy and decided to offer eight tickets to people from all over the world.

Along with his assistant Yozo Hirano, he arrived in Star City, a city built near Moscow in the 1960s to train generations of Soviet and now Russian cosmonauts, for weeks of training ahead of the flight.

"I almost feel like crying, it's so impressive," Maezawa said on his arrival at the Baikonur Cosmodrome in late November, where the flight will take off from.

Space tourism on the rise

The mission, organised by Roscosmos and its US partner Space Adventures, will signal Russia's return to the space tourism race after more than a decade's pause.

Roscosmos and Space Adventures had already collaborated between 2001 and 2009 to send wealthy entrepreneurs into space eight times. The latest was the founder of Cirque du Soleil, Canadian Guy Laliberté.

The trip by the two Japanese comes at a time when private space flights are on the rise.

In September, SpaceX organised a historic three-day flight into orbit with an all-amateur crew.

As a symbol of its growing space ambitions, Elon Musk's company plans to take several tourists around the moon in 2023.