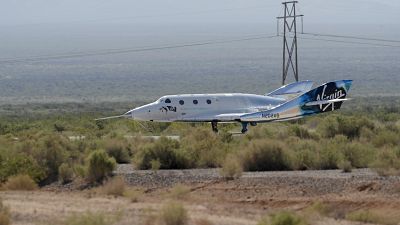 The Virgin Galactic rocket plane, with founder Richard Branson and other crew members on board, lands back in Spaceport America near Truth or Consequences, N.M., July 11, 2021   -   Copyright  AP Photo/Andres Leighton
By Euronews  with AP  •  Updated: 12/07/2021

Richard Branson completed a short space flight on Sunday aboard his own rocket ship.

Take-off took place at 16:30 CET after being delayed by an hour and a half due to weather conditions on site and was broadcast live on the Virgin Galactic website.

The British billionaire and five crewmates from his Virgin Galactic space tourism company reached an altitude of about 88 kilometres over the New Mexico desert — enough to experience three to four minutes of weightlessness and see the curvature of the Earth — and then safely glided home to a runway landing.

“Seventeen years of hard work to get us this far,” a jubilant Branson said as he congratulated his team on the trip back aboard the sleek white space plane, named Unity.

The London-born founder of the Virgin Group, who turns 71 in a week, wasn't supposed to fly until later this summer. But he assigned himself to an earlier flight after Blue Origin's Jeff Bezos announced plans to ride his own rocket into space from West Texas on July 20.

Virgin Galactic doesn't expect to start flying customers before next year. Blue Origin has yet to open ticket sales or even announce prices, but late last week boasted via Twitter that it would take clients higher and offer bigger windows.

Unlike Blue Origin and Elon Musk's SpaceX, which launch capsules atop reusable booster rockets, Virgin Galactic uses a twin-fuselage aircraft to get its rocket ship aloft. The space plane is released from the mothership about 13,400 metres up, then fires its rocket motor to streak straight to space.

The rocket plane's portion of the flight took just 15 minutes.

How safe is SpaceX's all-civilian mission?