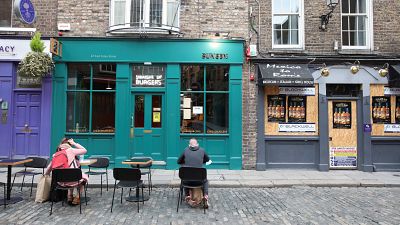 In their response to the COVID-19 pandemic, many governments in the west have been too slow to realise the importance of clean air and ventilation.

That’s the view of one lawmaker in Ireland, who is pushing to make clean air standards enforceable, as part of the country’s fight against the spread of coronavirus in schools and workplaces.

Paul Murphy, a Teachta Dála (TD) for People Before Profit, a socialist party active in the Republic of Ireland and Northern Ireland, saw the bill’s second reading pass in the country’s lower house on Wednesday, but it still has a number of hurdles before it can become law.

"Unfortunately the Irish government, like a lot of governments, has been very slow on the question of ventilation," he told Euronews Next.

We draw the comparison with cholera and typhoid, and the role of clean water in combating the spread of those diseases, and in a way clean air is the current equivalent of that

"There’s no emphasis on having windows open, having C02 monitors, having filtration systems".

The bill he is pushing for - with much cross-party and union support - would fix that he says.

The response to COVID-19 in Europe has been lacking on the issue of clean air and ventilation in comparison to some Asian countries, he suggests, which could be due to their experiences with other airborne virus epidemics in recent years such as SARS.

Some European countries are starting to recognise the importance of good ventilation in the fight against coronavirus.

In Belgium for example, certain businesses are now required to display air quality monitors so that customers can check the levels to see if they are happy the room is sufficiently ventilated.

And in Germany, pilot programmes for air purifiers in schools were underway as of this summer.

"We draw the comparison with cholera and typhoid, and the role of clean water in combating the spread of those diseases, and in a way clean air is the current equivalent of that, and that hasn’t been universally grasped," argues Murphy.

He says that while vaccines are clearly crucial to the fight against COVID-19, a "broader strategy" that includes preventative measures such as good ventilation in buildings is important too.

Murphy says the next stage for his party’s fight for cleaner air in schools and workplaces will involve discussions with the relevant government minister, and potentially more votes in Ireland’s parliament.

According to Ireland’s health department, there were 4,163 confirmed COVID cases in the last 24 hours on Thursday, with 545 COVID-19 patients currently hospitalised.