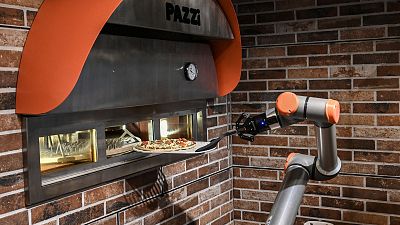 A new kind of chef is making a splash on the Parisian dining scene in the Beaubourg neighbourhood of the French capital.

The new pizzeria Pazzi is staffed entirely by robots, from order-taking to prepping the dough to putting the pizzas in boxes.

"We are in a very fast process, with a perfect control of time, a control of quality since we have a constancy offered by robotics, and then an environment that is quite cool and relaxed," said the co-inventor of the Pazzi robot, Sébastien Roverso.

"The idea is also to spend a few pleasant minutes watching the robot while you wait for your pizza to be made," he said.

The project took eight years of development as the team painstakingly adjusted their creation to ensure it could consistently deliver the highest quality pizza autonomously.

"What is difficult is the dough," explained Thierry Graffagnino, a chef consultant at Pazzi and triple world pizza champion.

"Because the dough is alive, you don't work with frozen dough. The machine must constantly adapt to the evolution of the dough.

"So we had to give the robot the means to make these corrections on its own, and some pizza makers can't even manage that themselves".

Far from feeling threatened by these machines moving into his domain, Graffagnino is enthusiastic about new mechanical competition.

"It's up to everyone to make a good pizza," he said.

"We'd see Americans and Chinese doing this, we wouldn't even talk about competition with the pizza makers.

“People would say “wow, the robot! Here, we have a French marvel with young engineers, and I get a kick out of working with them".