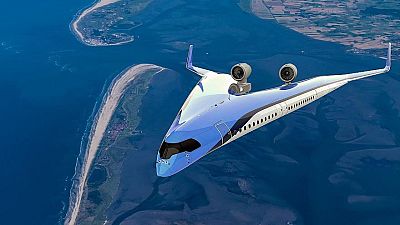 A man holds a V-shaped model aeroplane above his head and runs through a field, eventually letting go and watching as it glides a few metres above the ground.

This crude flight test was the very first step in the creation of a bold new aircraft that, its inventors say, could change the way we fly by the year 2041.

Roelof Vos, an assistant professor at the Faculty of Aerospace Engineering at TU Delft University in the Netherlands, is working with a team of engineers to build the Flying V, as the name suggests an unusual V-shaped aeroplane that is set to shake up aircraft design with its innovative oval-shaped cabin.

"I’m a plane designer," he said. "And this plane looks beautiful".

The project is a collaboration with KLM and Airbus and aims to strike a blow for green aviation.

"We want to make a big impact on reducing fuel consumption, and this aircraft is designed to be more energy-efficient," said Vos. "We are at a plateau in terms of aviation efficiency and the Flying V is trying to break through this plateau. We have a long way to go but it’s a good starting point".

The Flying V was the now-patented idea of Justuce Benad, an intern at Airbus in Hamburg, who put two fuselage barrels of an A380 plane at an angle to each other.

The cargo hold sits inside the wings behind a 6.1-metre wide oval-shaped cabin for passengers. The fuselages contain plugs that can be easily removed to reduce the size of the aircraft.

Integration with the airport terminal is helped by two doors side by side for not only improved emergency evacuation but also speedy passenger boarding and de-boarding.

We have no tail, so the design is simple, but the Flying V has to come in at a very high angle, like Concorde, so we have the tallest landing gear ever built for an aeroplane.

Vos estimates that 2041 is a "fair target date" for the first prototype and admits there is much research and development to be done.

"The oval structure is completely new; how do we know it’s efficient?" he pondered.

"We could make the plane more efficient by making it smaller but we don’t want it to be cramped for passengers so we’re exploring different ways to arrange the cabin," Vos said.

"We have no tail, so the design is simple, but the Flying V has to come in at a very high angle, like Concorde, so we have the tallest landing gear ever built for an aeroplane at five metres high that must fit inside the fuselage. There are a lot of unknown unknowns".

The Flying V could be powered by huge pressurised liquid hydrogen tanks that would sacrifice 70 per cent of cargo volume. "But that’s the compromise we have to go through to make carbon-neutral aviation," said Vos.

The first official test flight – which was a little more advanced than a man running in a field – saw engineers from TU Delft University fly a three-metre scaled version of the Flying V to measure aerodynamics during flight.

Controlling the plane via a laptop on the ground was chief engineer Malcolm Brown.

"It’s been two years of stressful, intensive work," he said. "To see it in the air was worth all the hours". The test flight was the culmination of years of work, and the moment the model took to the skies was understandably emotive.

"Malcolm was emotional because, after two years of work, the big fear was that it would stall and crash down," Vos said. "But to see it take off and stay in the air meant our calculations were sufficiently good for our first test flight and it was a relief".

The next step for Vos and Brown is to build a 13-metre scaled replica drone to test in a wind tunnel for handling, take-off and landing dynamics, and noise.

"We need to step it up and test it in a more professional environment," admitted Vos.

"We want to find people we can collaborate with and make our vision a reality. It’s a very inspiring project, the great thing is that there’s a lot to discover. There are so many things we hadn’t thought about when we started the research and that makes it very interesting for us".

Among all the unknowns, however, there is one thing of which Vos is sure. "The Flying V will absolutely change the way we fly, " he said. "Quite literally".