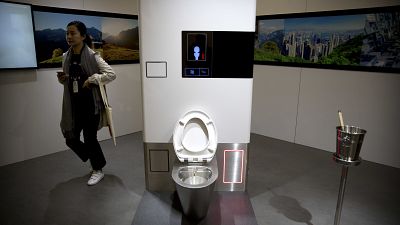 Since 2013, the United Nations has observed November 19 as World Toilet day in order to raise awareness on unequal access to "safe toilets" across the world.

According to the UN, more people in the world have phones than toilets, with some 3.6 billion people unable to access clean water and hygienic facilities.

But while there is a serious message to get across on this international day, it’s also a day to appreciate the various innovations made to advance the most humble privy.

What better way to start than with a filthy rich philanthropist with too much money on his hands.

Responding to a competition launched in 2011 by the Bill and Melinda Gates Foundation to "reinvent the toilet,” Cranfield University in the UK took up the challenge.

Its researchers have created a toilet that does not use running water and costs just a few cents to maintain per user per day. Its name? The Nanomembrane.

At the heart of the device are nanomembranes and chemicals that separate materials and eliminate odours.

You can find these toilets in five different places in the Shibuya district of Tokyo. Anyone who approaches the toilet can see immediately if someone is inside and if the toilet is ready to be used and clean.

But rest assured, once you enter the toilet and close the door, the plexiglass windows automatically turn opaque.

The toilets were designed by a series of Japanese designers. The whole project was funded by the Nippon Foundation as part of the Tokyo Toilet Project.

3. An app to remember when it’s time to go

An application to remember to go to the toilet? Yes, you’ve correctly read it.

The company D Free is proposing to equip young children, as well as senior citizens, with their latest innovation to remind them to pee.

Using a sensor installed on the abdomen, a digital application that detects changes in the size of the bladder and the degree to which it is full enables its owner to predict when he or she will need to urinate.

Already on sale in France, the United States and Japan, this alert system could also tell nursing home staff which patients should go to the bathroom soon.

2. One throne to rule them all

In Paris, the shop Le Trône has been selling Japanese toilets for almost 15 years.

The models of seats and evacuation systems are increasingly elaborate: tornado flushing, heated seats, deodorising filters or even biosensors installed in the bowl to measure blood pressure or blood sugar levels through poo. Honestly, there is no shortage of ideas.

"The most popular feature is the washing shower. Then you have the drying function. It is even possible to adjust the temperature,” Jean-Louis Lamarque, the owner of the shop, told French news site LCI.

In France, Japanese toilets represent barely 1 per cent of sales just now. But the market is growing rapidly.

"In Japan, it took about thirty years. It will take about forty years for us in France. Once you've tried it, there's no turning back," says Jean-Louis Lamarque.

1. When going to the loo makes you rich

Topping our list, Japan has been dethroned as the home of the innovative toilet by South Korean Cho Jae-weon, an urban and environmental engineering professor at the Ulsan National Institute of Science and Technology (UNIST).

He has designed an eco-friendly toilet connected to a laboratory that uses excrement to produce electricity, which is then used to mine cryptocurrencies.

"If we think out of the box, faeces has precious value to make energy and manure. I have put this value into ecological circulation," Cho told Reuters.

An average person defecates about 500g a day, which can be converted to 50 litres of methane gas, the environmental engineer said.

This gas can generate 0.5 kWh of electricity or be used to drive a car for about 1.2k.

Cho has devised a virtual currency called Ggool, which means honey in Korean. Each person using the eco-friendly toilet earns 10 Ggool a day.