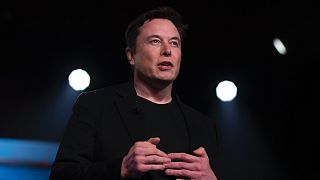 Musk said he would sell Tesla shares after Twitter users backed the option in a poll   -   Copyright  AP Photo
By Tom Bateman  with Reuters  •  Updated: 08/11/2021

Twitter has spoken, and it's urging Tesla CEO Elon Musk to sell 10 per cent of his shares in the company to pay a tax bill.

Musk, who has over 60 million followers on the social network, posed the question in a poll on Saturday.

"Much is made lately of unrealised gains being a means of tax avoidance, so I propose selling 10% of my Tesla stock. Do you support this?" he asked.

After over 3.5 million votes, the richest person in the world had his answer: Yes.

Much is made lately of unrealized gains being a means of tax avoidance, so I propose selling 10% of my Tesla stock.

Do you support this?

The Tesla CEO later indicated that he would "abide by the results" of the poll, telling one follower he was "prepared to accept either outcome".

Musk currently holds around 170.5 million shares in electric car maker Tesla. Selling ten per cent would net him around €18 billion at current prices.

As markets in Frankfurt reacted to the news on Monday, Tesla's share price fell 7 per cent.

But there is another factor that could have pushed Musk to sell, regardless of what his Twitter followers decided.

With US federal and California state taxes put together, Musk would need to pay around 54 per cent in tax - $15 billion (€12.9 billion), according to an estimate by US broadcaster CNBC.

'Time for the Billionaires' Income Tax'

The poll also came after moves by Democratic lawmakers in the United States Senate to tax billionaires on "unrealised gains", meaning that they could be liable to pay taxes on assets like shares that increase in value, even if they do not sell them.

Senator Ron Wyden, a Democrat and chair of the Senate Finance Committee responded to Musk's poll, saying, "whether or not the world’s wealthiest man pays any taxes at all shouldn’t depend on the results of a Twitter poll. It’s time for the Billionaires' Income Tax".

While Musk is the world's richest person, with an estimated net worth of over $300 billion (€259 billion), his wealth comes from assets such as shares in his companies, rather than a regular salary. As a result, he does not pay income taxes.

Senate Democrats in favour of the plans say it would help finance US President Joe Biden's COVID-19 recovery spending agenda and fill a loophole that has allowed American billionaires to defer paying capital gains taxes indefinitely.

Musk criticised the proposals, saying "eventually, they run out of other people’s money and then they come for you".

Uber drivers offered 50,000 Teslas, but can they afford them?