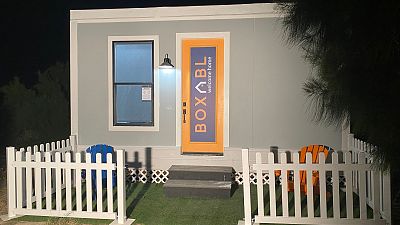 At just 34 square metres, the Casita prefab home has one key aim: significantly lowering the cost of home ownership for everyone.

These minute homes, created by Las Vegas-based company Boxabl, include a kitchen, bathroom, bedroom and living room within one small space and can be purchased for as little as $49,500 (€42,261).

Small-scale homes have recently become a popular alternative to the classic family house or apartment, and offer a more compact way of living.

Tesla CEO and SpaceX founder Elon Musk is believed to be one of the first big names to have jumped on this trend.

Back in November 2020, Boxabl revealed that it had installed one of its prefab homes in Boca Chica, Texas for a "top secret customer".

My primary home is literally a ~$50k house in Boca Chica / Starbase that I rent from SpaceX. It’s kinda awesome though.

Only house I own is the events house in the Bay Area. If I sold it, the house would see less use, unless bought by a big family, which might happen some day.

What is a Casita?

The Casita, in which Musk reportedly lives, is Boxabl’s flagship unit, and is considered to be a far more energy-efficient studio apartment.

According to the company, the box house's kitchen has a refrigerator, dual sinks, an oven, a dishwasher, a microwave, cabinets, and a dining table that connects with the countertops.

The bedroom is located opposite the kitchen, with an entry door that acts as a separation of space.

The bedroom's media centre can divide the bedroom area from the living room area, which has space for a couch and a coffee table, although these two "rooms" can be flipped if necessary.

The bathroom is positioned next to the kitchen and has a shower and bath, a sink, a countertop, a backlit mirror, and a sliding door.

Also located within the space is an on-site washer and dryer, designated ironing space, and temperature control within the 2.8 metre-high ceilings.

Rather than using the standard "lumber, hammer and nails'" construction method, these Casitas are built with steel, concrete, foam insulation, and laminated paneling, making them strong enough to withstand hurricane-force winds, mold-resistant, as well as flood and snow tolerant.

The electricals, plumbing and HVAC for the Casitas are completed in the factory before its shipped and when it arrives at its final destination, the home simply needs to be unfolded and attached to its foundation and utilities.

One of the benefits of these small prefabs is that shipping logistics are very straightforward.

Casitas can be folded down from 6 metres to about 2.5 metres while being transported or towed

Despite its growing popularity, Boxabl has only built three tiny homes so far.

Boxabl currently has 47,000 customers on a waitlist and over 2,000 of these customers have already put down a deposit to secure their prefab.

In terms of overall interest, there has been interest for more than 100,000 units, according to the company.