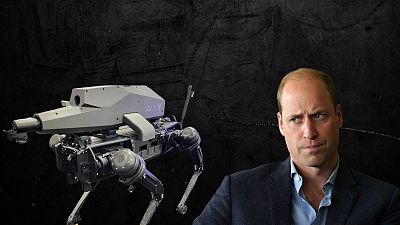 It appears the world has been taking Black Mirror plot lines as a guide rather than a warning.

Ghost Robotics has been showing off its quadrupedal, dog-like “killer robot” that’s been equipped with a special purpose unmanned rifle.

The benefit of having a four-legged bot rather than one on wheels is that it can better navigate different terrains, such as uneven surfaces or stairs.

And to make matters even more interesting, the rifle itself has a 30x optical zoom, thermal camera for targeting in the dark, and an effective range of 1,200 m.

It was built in collaboration with Sword International, a small arms specialist, and was shown off for the first time this week at the Association of the United States Army’s 2021 annual conference.

Ghost Robotics CEO Jiren Parikh dismissed the idea that the Terminator-style robot is autonomous, according to the New Scientist. He said that there is always a human in control.

Late last year, the New York Police Department started using “Spot,” a dog-like robot made by Boston Dynamics. They painted it blue and renamed it "Digidog". It went mostly unnoticed until New Yorkers began spotting it in the wild and posting videos to social media.

Shortly afterwards, the department returned the robot to its manufacturer.

"This is some Robocop stuff, this is crazy," was the reaction in April from Democratic congressman Jamaal Bowman.

He was one of several New York politicians to speak out after a widely shared video showed the robot strutting with police officers responding to a domestic-violence report at a high-rise public housing building in Manhattan.

Days later, after further scrutiny from elected city officials, the department said it was terminating its lease and returning the robot.

There was also anger in Hawaii after it was revealed that homeless residents of a state-run tent city in Honolulu were having their eyes scanned by the same robot.

Police in the city said it was a safer way to check for symptoms of COVID-19.

But local civil rights advocates argued that the use of the robot dehumanised some of the city’s most vulnerable residents.

"Because these people are houseless it’s considered OK to do that,” said Jongwook Kim, legal director at the American Civil Liberties Union of Hawaii. “At some point it will come out again for some different use after the pandemic is over".

Homeless residents of a state-run tent city in Honolulu, Hawaii, are having their eyes scanned by a robotic police dog. ?

Police in the city say it's a safer way to check for symptoms of COVID-19. ?

Others think its dehumanising.

Prince William criticised the race for space tourism on Thursday, calling for a focus on the environmental problems on Earth instead.

"We need some of the world's greatest brains and minds fixed on trying to repair this planet, not trying to find the next place to go and live,” he said in an interview with BBC’s Newscast.

"I think that ultimately is what sold it for me - that really is quite crucial to be focusing on this [planet] rather than giving up and heading out into space to try and think of solutions for the future".

The journey only lasted a few minutes and made 90 year-old Shatner the oldest person to reach the final frontier.

It was only the second manned flight of the American billionaire’s New Shepard rocket.

Ahead of COP26, Prince William, who is second in line to the British throne, also joined his father Prince Charles' climate appeal.

The Prince of Wales "talked about climate change a lot more, very early on, before anyone else thought it was a topic," according to William.

The Duke of Cambridge added that "it would be an absolute disaster if [Prince] George is sat here talking" about saving the planet in 30 year's time.

“I want the things that I’ve enjoyed – the outdoor life, nature, the environment – I want that to be there for my children, and not just my children but everyone else’s children.

“If we’re not careful, we’re robbing from our children’s future through what we do now. And I think that’s not fair”.

Microsoft shutting down LinkedIn app in China amid scrutiny

Microsoft is shutting down its main LinkedIn service in China later this year as Beijing tightens its internet rules.

The company has faced a "significantly more challenging operating environment and greater compliance requirements in China,” it said in a blog post on Thursday.

Microsoft is the latest American tech giant to lessen its ties to the country after years of trying to tailor its services to the demands of government censors.

LinkedIn said it will replace its localised platform in China with a new app called InJobs that has some of LinkedIn's career-networking features but will not include a social feed or the ability to share posts or articles.

Chinese regulators have been escalating a broad crackdown on the internet sector, seeking to exercise greater control over the algorithms used by tech firms to personalise and recommend content.

They have also strengthened data privacy restrictions and expanded control over the flow of information and public opinion.

Google pulled its search engine out of mainland China in 2010 after the government began censoring search results and videos on YouTube. It later considered starting a censored Chinese search engine nicknamed Project Dragonfly but dropped the idea following internal protest in 2018.

Microsoft's own search engine, Bing, was temporarily blocked in China in early 2019, leading the company's president, Brad Smith, to reveal that executives sometimes have difficult negotiations with the Chinese government over censorship and other demands.

Adding to the sensitivities this year was a massive hack of Microsoft's Exchange email server software that US officials have blamed on criminal hackers associated with the Chinese government.

Russia is behind 58% of state-sanctioned hacks, according to Microsoft