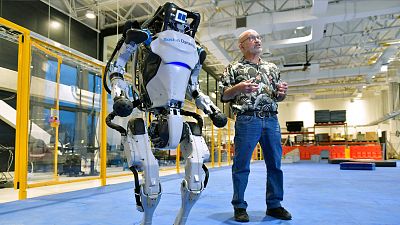 Don’t expect an easy getaway if you are chased by Boston Dynamics’ humanoid robot Atlas.

The five-foot robots are learning parkour or free-running over obstacles.

The US company showcased Atlas’ skills in a video, which includes two of its robots for the first time performing backflips, vaulting beams, leaping over objects and even cheering at the end of the near one minute routine.

Atlas weighs 86 kg and uses hydraulics and battery-powered electric motors for movement. It also has three onboard computers.

But the robots won’t be able to chase you down anytime soon. The routine took months of development, the company said, and it is far from perfect.

Atlas gets the vault right about half the time and can lose its balance and fall backwards on some of the runs, the company said.

“There are a lot of pretty exciting behaviours here, and some of them are not totally reliable yet,” said Ben Stephens, the Atlas controls lead.

“Every behaviour here has a small chance of failure. It’s almost 90 seconds of continuous jumping, jogging, turning, vaulting, and flipping, so those probabilities add up”.

Atlas is currently a research model, unlike its model Spot, that aims to push the limits of robotics. The company says the parkour practise will be useful for future helper robots in developing the same range of movement and flexibility as humans.

"I find it hard to imagine a world 20 years from now where there aren’t capable mobile robots that move with grace, reliability, and work alongside humans to enrich our lives,” said Atlas team leader Scott Kuindersma.

“But we’re still in the early days of creating that future. I hope that demonstrations like this provide a small glimpse of what’s possible”.

Meet 'Tom', the robot farmer of the future