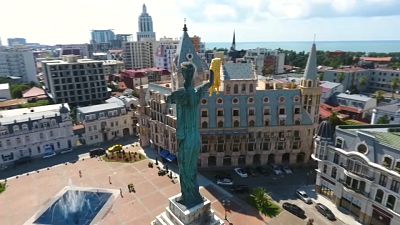 The autonomous region of Ajara in Georgia has been particularly active in protecting the environment whilst also creating new eco-tourism opportunities. Its capital Batumi is the ideal gateway to reach the Georgian natural sites that UNESCO has recently added to its World Heritage list.

Ajara hosts three of the four parks and protected areas that have now received international recognition. The bustling seaside resort of Batumi is a year-round destination for tourists, according to the local government. Authorities have developed infrastructure in different domains to prolong the tourist season and investing in new ecotourism destinations is part of this strategy.

Euronews talked to Tornike Rijvadze, the government chairman in the Autonomous Republic of Ajara, to find out more about the popular area. He describes Batumi as the perfect travel gateway for all sorts of travellers. "We have a nice beach, which is very lively", he adds and you can also enjoy the mountains. It is, he says, what all adds up to make Batumi a four-season destination.

The Autonomous Republic of Ajara has been doing a lot to build sports infrastructure, which Rijvadze argues "is a very critical part of the overall tourism and overall economy" in the area. The town for example is very proud to have a new UEFA category stadium. To Rijvadze, it goes a major way to putting the city on the global sports map.

The Autonomous Republic of Ajara also has plans to expand in other municipalities that will allow ecotourism and sport tourism to be linked, "where travellers can have a four-season experience", Rijvadze adds. The idea is to keep up the Batumi reputation of being a world-class tourism and travel destination.